A knife is a tool that should be part of everyone’s everyday carry. Although folders are by far the most popular knives carried by law enforcement and the general public, a fixed-blade knife has some key advantages over folders. These advantages include ease and speed of deployment utilizing only gross motor skills, and no locking mechanism to potentially fail.

A major reason we carry folders is convenience. We can simply clip or drop them in a pocket. Deployment from a pocket location is also less affected by layers of clothing. The knife is easily accessed whether we’re seated, standing or the fight has gone to the ground. A fixed-blade knife designed for pocket carry would be a game changer. Enter the AMTAC Blades Northman.

The Northman had its genesis in the personal requirements of former U.S. Navy SEAL Bill Rapier, Founder and Chief Instructor of AMTAC Shooting. Bill retired from the U.S. Navy a few years back after 20 years of service. His duty assignments with the Teams included several years at SEAL Team 3 and over 14 years at Naval Special Warfare Development Group, commonly known as DEVGRU.

AMTAC Blades got its start as a conversation with a friend of his, the “Northman” whom he met through one of his training courses. Bill wanted a fixed-blade knife that would fit in the front pocket to replace the folder he carried there. He wanted a knife that not only excelled for combatives but was also rugged enough for the backcountry. AMTAC Blades Belt Firesheath, shown here in Coyote Brown, is available separately. It’s designed to be worn OWB or IWB on your belt AMTAC Blades gives you a lot of carry options. Firesheaths feature a molded in ferro rod for emergency fire starting (hence the name). They also have a folder-over pocket made of soft thin Velcro that you can you can use to hide a cuff key, tinder, money, tinder, etc. 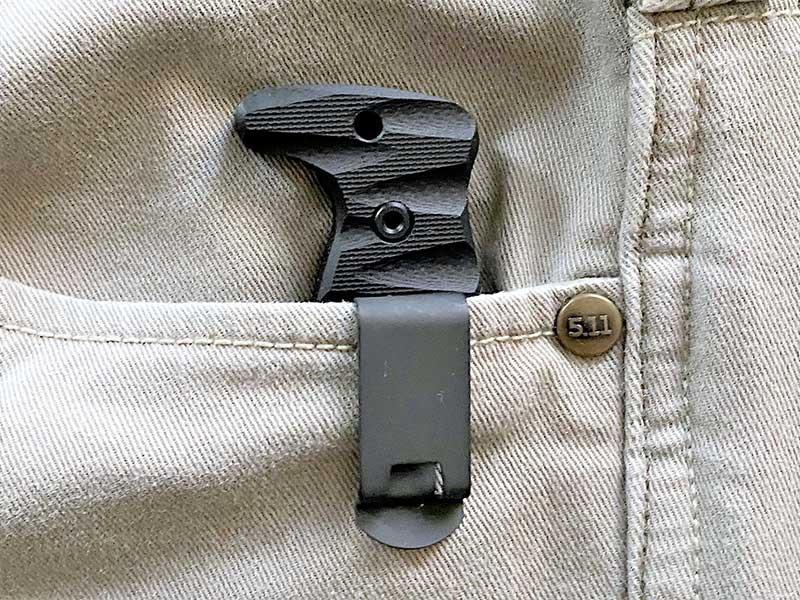 Several weeks later, Bill was surprised to receive a package containing a prototype. They kept refining it over a period of a year and a half until the knife fully met Bill’s vision of what the knife should be. Additional guidance and technical know-how in its development was provided by Tuhon Tom Kier and Jake Hoback. The AMTAC Blades Northman was born.

Unlike other concealable fixed-blade knives, the Northman is designed to be carried in the front trousers pocket, allowing easy access and rapid deployment from a discreet hand position. It’s a fixed-blade knife that carries like a folder.

The Northman features a 3.5-inch full-tang drop-point blade made of cryogenically treated Böhler M390 stainless steel (60-62 HRC). It has a stone-washed black DLC (Diamond Like Carbon) finish. The blade is 0.15-inch thick. The knife has an overall length of 6.9 inches. It weighs 4.3 ounces.

Böhler M390 stainless steel is a premium “super steel” that’s the gold standard for high-end knives. M390 is a martensitic chromium steel produced with powder metallurgy that offers extremely high wear resistance and high corrosion resistance. It takes a very fine edge and holds the edge exceptionally well. Its ease of sharpening is good relative to its level of wear resistance.

The stonewashed DLC finish provides additional protection for the blade and looks awesome too. It exhibits the hardness of a diamond and the lubricity of graphite, making it ideal for a hard-use tactical blade. It’s exceptionally durable and wear-resistant.

The blade is optimized to provide the best balance between tip strength and thrusting ability. The drop point blade profile allows the spine of the blade to continue forward to the tip of the blade for tip strength while maintaining an upward curve of the edge and placing the tip in line with the user’s hand. It has a sharp tip that pierces easily.

The blade has a saber grind. The primary edge bevel on a saber grind starts partway down the blade and continues to the edge. The secondary bevel forms the cutting edge. It’s a very strong grind that maximizes edge strength. It sacrifices some cutting ability due to increased drag, compared to the weaker flat grind. It’s the grind of choice for a multi-use tactical knife.

The Northman is available with or without serrations. The serrated version is actually partially serrated. Since a duty knife may be tasked with performing a broad spectrum of cutting chores, I recommend going with the serrated version.

The serrated version has 1.125 inches of serrations. The serration pattern consists of one large scallop followed by two smaller scallops. This provides a sharp, aggressive cutting cycle.

A serrated edge is a functionally longer cutting surface, so it will hold up longer without needing to be resharpened. The drawback to the serrations is that they aren’t as simple to resharpen, although with the proper sharpening tool and technique it’s not a daunting task.

AMTAC Blades Northman is a small fixed blade knife designed to replace the cutting tool carried in your pocket. It’s designed for both combatives and utility/backcountry. The Northman has a very well-thought-out ergonomic handle. It has a deep handle punyo (the very back of the handle that juts out) that allows the knife to be quickly deployed. Textured black G10 scales with beveled edges and deep “treads” coupled with the handle profile ensure a comfortable and secure grip. The scales are attached to the tang with black-finished stainless steel Torx head screws. There’s also a lanyard hole.

Not one to rest on its laurels, AMTAC Blades upgraded the Northman in 2020 with some refinements based on extensive field use and input from end-users. The spine is now squared to allow it to be used with a ferro rod. The handle punyo has been opened up by about 1/16th of an inch for an even more positive draw stroke. Jimping has been added to the top and bottom of the tang towards the rear of the handle. A small amount of material has been removed from the handle, lightening it by 0.4 ounce.

The sheaths that come with most fixed-blade knives often seem like they were an afterthought. This isn’t the case with the Northman. AMTAC Blades partnered with custom holster maker BlackPoint Tactical for the sheaths. They’re very well thought out and well made. They’re absolutely top notch.

The sheaths are made of KYDEX and are of a two-piece design. They feature Discreet Carry Concepts proprietary 10xx steel alloy High Level Retention (HLR) Discreet Gear Clips®, a molded-in ferro rod for emergency fire starting, and a very thin, soft Velcro® fold-over small pocket on the back of the sheath The sheaths are fully ambidextrous and adjustable for retention. The belt sheath has a 7/8-inch high sweat guard that also aids in re-sheathing. AMTAC Blades refers to the sheaths as “Firesheaths” due to the incorporated ferro rod.

The Northman comes with a Trainer that replicates the live blade in size and handling for safe and realistic close contact distance training. It allows you to work with a partner in practicing these skills. The Trainer features a blue anodized unsharpened aluminum blade with a blunt tip and blue G10 handle scales. The Trainer comes with a sheath.

Each Northman is individually serial numbered. “Sterile” versions are available which are devoid of any markings on either the knife or the sheath. The Trainer has the standard AMTAC markings.

Fit and finish on my Northman is flawless. The knife came hair-shaving sharp out of the box. The complete package (Northman, Pocket Firesheath, Trainer and trainer sheath) is $450.00, which is fairly reasonable considering all that you get. All AMTAC Blades products are made in the USA.

If you’re looking for an outstanding fixed-blade knife for everyday carry on or off duty, you need look further than the AMTAC Blades Northman.