See a police cruiser racing down the road, lightbar flashing, sirens blaring and the first thought is where is that officer headed. To a gang war downtown, a bar fight at the local hot spot, a burglary or home invasion, and then the thought, ‘somebody’s going to jail’.

But that’s not always the case. Not every call a police offer responds to ends in an arrest. Many times, it’s more than just an investigation into a crime. Many times, it’s a call for help, a call for an immediate crisis intervention and more often than not, when the officer shows up at the scene, what they’re faced with rips at their heart.

And when there’s nothing they can do about it in an official capacity, because the law they have sworn to uphold and the bureaucracy they work in doesn’t allow them to, it haunts them even more. So when officers want to help beyond their official capacity, they often reach into their own pocket to do so when they encounter barriers.

That’s what happened to Lt. Jacqui MacConnell in 2009. A call she responded to became a life-changing event. After rescuing three children in one of most horrific abuse cases she’d ever experienced in her career as a police officer, she’d had enough and decided to do something about it. A few months later Angels on Patrol was born.

Winner of the raffle will receive the fabulous prize described above.

Created to serve the Phoenix Police Department, its mission is to provide police officer initiated support to community members in times of crisis. It is the only nonprofit organization helping law enforcement officers go above and beyond the call of duty. Through officer-initiated requests, Angels on Patrol moves families from crisis to stability by securing safety, providing emerging basic needs and connection to long-term community resources.

The bottom line is these officers continue to help when other agencies are stymied by red tape and bureaucracy. It relies completely on the generosity and donations from individuals, corporations and local businesses.

One local business—AZ Shooter’s World—is doing exactly that. A local indoor shooting range/retail store with two locations in the Phoenix Metropolitan Area, Shooter’s World has partnered with Angels on Patrol in a fundraising effort by hosting a raffle with the winner receiving an incredible gun package.

Digging into their own pockets and donating from their own product inventory, Shooter’s World created an online raffle with 100% of the proceeds going to Angels on Patrol. There’s only one prize, but that package is worth over $3,000 and it’s a shooter’s dream come true. A raffle ticket is $50.00 and can be purchased at www.shootersworldonline.com. Only 1,000 tickets will be sold and the raffle ends December 24, 2020 at midnight, MS. $50.00 may seem a bit pricey, but look at the prize:

COVID-19 has hindered fundraising efforts for many groups and organizations, but Shooter’s World worked around the constraints of the pandemic mandates and found a way to continue in their support of this organization. Angels on Patrol provides children a Merry Christmas when they may have had nothing. 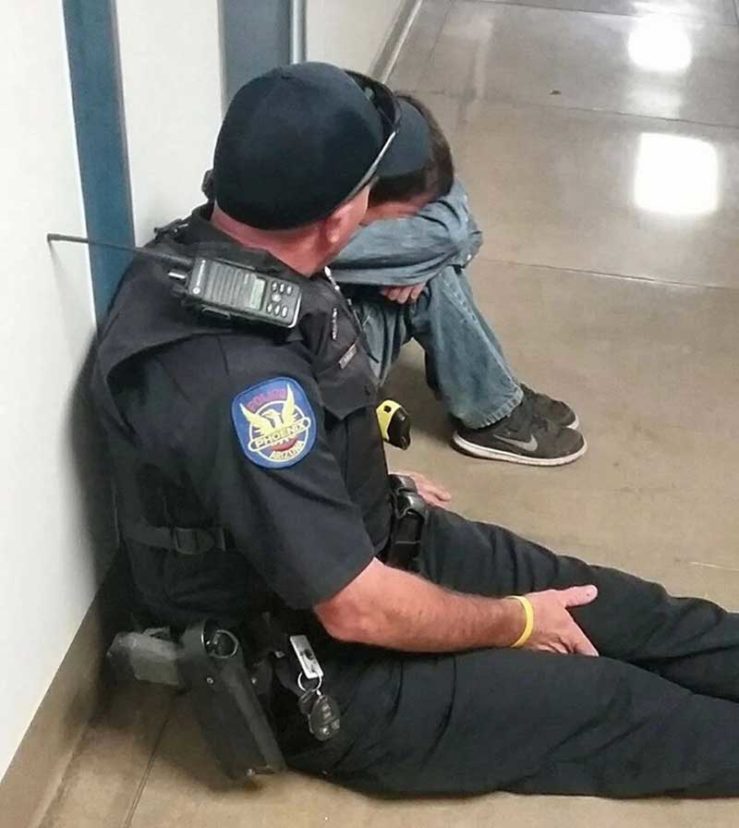 “Shooter’s World became involved with Angels on Patrol in 2017 because we wanted to give back to our community and show support for local law enforcement”, explained Paige Roux, Shooter’s World Event Coordinator. “I’ve known Jacqui MacConnell for many years and after learning about the uniqueness of the Angels on Patrol’s mission, we knew this was the organization we wanted to support every year. Unfortunately due to this year’s Covid restrictions, we couldn’t host our annual charity event for them that usually raises around $10k. But, we wanted to do something to show our support, and thought a gun raffle would be perfect!”

Since 2009, Angels on Patrol has served over 16,000 individuals through direct requests from police officers. From only seven requests received in 2010, the organization received and were able to respond to 250 requests in 2019. As of early 2020, Angels on Patrol serves 13 law enforcement agencies across Arizona.

Requests for help are vetted and originate 100% from law enforcement officers. There is no waiting list and service to the officer and person in need is promptly responded to and delivered.

“As officers we are limited when it comes to issues like homelessness and people that are in crisis. Angels on Patrol is a great resource for us to have. I feel really thankful that they’re out here helping us help people while we’re doing our jobs,” said Officer Elmore an officer with the Mesa Police Department.

This is where donations and support can change the lives of others, from the officer to the community they serve. Jacqui MacConnell, Founder of Angels on Patrol explained. “People are able to be helped all because an officer had the heart to reach out.”

To view a video of the raffle prize and a true story of Angels on Patrol go to https://rumble.com/vbx06p-angels-on-patrol-raffle.html
and https://youtu.be/ebPdOOJGn4k

For more information on Angels on Patrol, visit https://angelsonpatrol.org

Raffle tickets can be purchased at www.shootersworldonline.com. Help officers help others and win a prize package worth over $3,000.00!