BALLISTIC BREACHING WITH A SHOTGUN Speed is essential in any dynamic entry. Breaching must be both rapid and effective. There are a variety of methods mechanical, thermal, explosive and ballistic that may be employed depending on what is to be breached and the tactical situation.

From a military perspective, since combat has migrated toward military operations in urban terrain (MOUT) ballistic-breaching operations have increased. Ballistic breaching, with a shotgun offers a number of advantages over other breaching methods.

Although entries may be made through windows, skylights or explosively breached openings, the most common means of entry into a structure is through a door. Although law enforcement teams often make the initial breach with a ram, there are advantages to ballistic breaching with a shotgun.

When it is properly employed, a shotgun can provide teams with safer and faster door breaching than other methods of breaching. It is not limited to just doors. Shotgun breach can also be employed to breach iron-barred windows, and take out sliding glass doors and defeat padlocks.

Utilizing a shotgun for breaching offers tactical teams several advantages. It is quicker than manual breaching, jamb spreading or ramming and is safer and requires less training than thermal and explosive entry. Marines with the Special Reaction Team breach an entryway using the M1014 joint service combat shotgun.at Camp Hansen. The team’s continuous training allows it to maintain the readiness required to respond to a wide range of emergencies with speed, proficiency and effectiveness when the call is made. Photo: US Marine Corps photo by Cpl. Jose D. Lujano / Released. 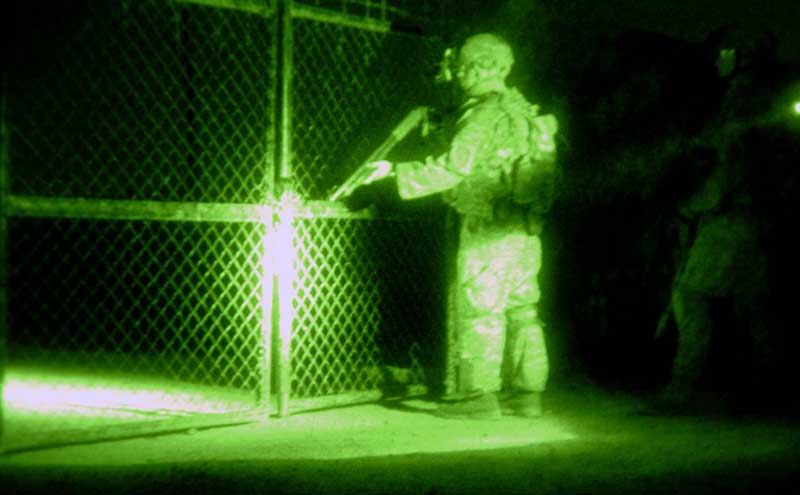 U.S. Army Soldier breaches a gate with a shotgun using M1030 breaching munition during a raid in Mushada, Iraq, June 11, 2007. The frangible design of the munition minimizes ricochet hazards currently associated with buckshot breaching and provides a much safer alternative to the Soldier. Photo: US Army photo by Staff Sgt. Antonieta Rico / Released.

A compact pistol-gripped (or Raptor®-gripped) 12 gauge shotgun make the best breaching shotgun. Shotguns that are equipped with a fixed buttstock or that have a barrel that is too long will be unwieldy and more difficult to employ in breaching operations. Magazine capacity is also important to consider. Multiple breaches/shots may be required. Another factor to consider is the ability to manipulate the safety with the strong hand without changing grip.

There are pros and cons to pump shotguns versus semiauto shotguns. Each has its advantages and disadvantages. Pump shotguns provide greater versatility and are more widely utilized. Downside is that a pump don’t permit the rapid double taps of a semiauto shotgun when second shots are necessary.

Breaching shotguns need to have a cylinder bore to allow all slugs to be safely fired. Although some frangible rounds may be safely fired in a shotgun with up to a modified choke, this is not the case with frangibles from every manufacturer.

When breaching a minimum safe standoff distance must be maintained before firing the shotgun. The shotgun cannot be placed directly against the door. There are a number of muzzle standoffs on the market that allow the proper standoff to be maintained. The outstanding Original Breacher® Breaching Standoff Device from Royal Arms International is an excellent example.

There are a number of advantages to employing a standoff. The standoff provides increased speed and placement by allowing the shotgun to be fired with the standoff in direct contact with the jamb or door. They permit safe contact by venting muzzle gasses. The better standoffs also reduce recoil and eliminate muzzle jump and deflect debris.

A “firearm” like the 12 gauge Mossberg 590 Shockwave is a non-NFA alternative to “short-barreled” breaching shotguns. Although it’s not considered a shotgun under federal law, state and local laws may vary. Photo: O.F Mossberg & Sons. Royal Arms Breaching Stand Off Device is purposely made to solve the need of law enforcement and military to breach a door with the ultimate speed and precision. The Breacher has large aggressive teeth in the muzzle end to bite into the door and grab hard. Photo: Royal Arms International.

Shotgun breaching should always be done with a dedicated breaching shotgun. Having a shotgun-armed operator carrying breaching rounds in addition to traditional slug or buckshot rounds is a disaster waiting to happen.

Standard rounds should never be employed for breaching. Although standard rounds could be employed to defeat door mechanism, they pose an extreme safety hazard. During MOUT operations, Soldiers have suffered severe injuries during breaching operations using 00 Buckshot cartridges that are not designed for breaching. Not only are friendly personnel at risk from ricochet, standard rounds also prose an extreme safety hazard to those on the other side, such occupants of a structure.

In 2008, the Army approved a new 12 gauge frangible breaching round—the M1030—for use by Soldiers. The M1030 is now used for defeating wooden doors, deadbolts, knobs, hinges and padlock hasps. The design of the munition minimizes ricochet hazards currently associated with buckshot breaching and provides a much safer alternative to the Soldier.

Frangible breaching rounds are designed to disintegrate into a fine powder as they defeat the door mechanisms or padlock hasps, minimizing the potential for ricochet or injury to any individual on the other side of the door.

The first use of frangible rounds is credited to the late Detective Arleigh McCree Officer in Charge of the Firearms and Explosives Unit of the Los Angeles Police Department. Detective McCree along with Officer Ronald Ball were tragically killed on 8 February 1986 while attempting to defuse two booby-trapped pipe bombs.

The frangible slugs developed by Detective McCree were made from steel shot and dental ceramic powder. It was Detective McCree that coined the term “Avon. Frangible rounds designed specifically for breaching are now available commercially from a number of manufacturers.

Tests have shown that the greatest transfer of energy and efficiency in slug frangibility result from high slug velocities achieved with medium CUP gas pressures. This is best achieved by utilizing a full-length plastic hull shell with an extra-high brass, along with a gas check.

It is absolutely essential for safety that frangible slugs completely disintegrate during breaching and not refuse into larger particles as a result of the heat that is generated. I recommend using frangibles that are constructed of either compressed copper or of clay and extremely fine steel shot. These materials eliminate the possibility of refusing, something that can occur with frangible slugs that are constructed of compressed zinc or glued lead shot.

Frangible breaching rounds, such as the Royal Arms TESAR-1 Copper Frangibles shown, are designed to disintegrate into a fine powder as they defeat the door mechanisms or padlock hasps, minimizing the potential for ricochet or injury to any individual on the other side of the door. Photo: Royal Arms International

Four different TESAR frangibles and one TECR frangible are available from Royal Arms. They are the TESAR-1; TESAR-2; TESAR 4; TESAR-5; and TESCR#3.

TESAR-1 (orange color-coded cap) has a 275-gr. copper frangible slug and a velocity of 1,750 fps (note: all velocities in article are from an 18-inch barrel). It is designed for wood doors (solid and hollow core) and defeats common locks, cross bolts and hinges.

TESAR-2 (black color-coded cap) has a 425-gr. copper frangible slug and a velocity of 1,525 fps. It is designed for metal doors and heavy locks and hinges, eliminating the need for multiple shots.

TESAR-4 (yellow color-coded cap) has a 750-gr. copper/S-70 steel frangible slug and a velocity of 1,285 fps. It is designed for Class 3 heavy steel doors and defeats Class 3 doors, locks and hinges.

TESAR-5 (blue color-coded cap) has a 500-gr. copper frangible slug and a velocity of 1,450 fps. It is designed for metal doors, locks and hinges and defeats heavy locks, cross-bolts and hinges (steel doors/steel frames).

TESCR#3 (green color-coded cap) has a 365-gr. Clayvon® (clay with S-70 steel shot) frangible slug and a velocity of 1,650 fps. It is designed to defeat most doors, locks and hinges (hollow core doors to light steel doors) TESCR frangible are designed to produce a bigger hole with a reduced risk of over-penetration.

TESAR frangibles are unique in their high degree of accuracy. They remain accurate out to 90 yards. They do not ricochet. They may be also utilized taking out street lights and attacking dogs with little fear of over-penetration.

The TESCR#3 is my choice of the five Royal Arms frangibles if an agency wants to limit the types of rounds in its inventory. Having a single round that can be used on most commonly encountered wood and steel doors has definite advantages.

TESAR and TESCR frangibles can also be successfully employed to defeat iron security bars common on many windows. They may also be employed to effect entry through sliding glass doors. Barred windows may be defeated by shooting out the 3/8-inch iron bolts (top and bottom) on one side and then using leverage to peel back the bars. Sliding doors may be taken out by shooting at the bottom corner of the door, one-inch above the frame. The glass will then come straight down or “shovel” out a maximum of five feet on either side. The glass will not implode or explode.

Breaching a door with the fewest number of rounds possible is faster and reduces the chance of collateral damage. Attacking the latch and lock are the easiest to target and requires fewer rounds to breach. Attacking the hinges requires more rounds being fired and the hinges may be hidden from the outside. When breaching a door, the frangible rounds to the lock side are fired at a point halfway between the lock or handle and the door frame in order to hit the bolt holding the door shut. In those situations in which a hinge must be breached, MOUT doctrine calls for a total of three shots, one shot per hinge, followed by an attempt to open the door.

Shots should be fired at a downward angle if the shot is at chest height or lower and at upward angle if above chest height. The reason for this is to lessen the possibility of a person being struck by a projectile or debris.

Royal Arms TESAR and TESCR#3 frangibles work well in this role. Although the TESCR#3 doesn’t have anywhere have near the accuracy of the TESAR frangibles, it will work well as a close range defensive round.

This article is only intended as a brief overview of ballistic breaching with a shotgun. It is not intended as, nor is it a substitute for formal training by a qualified instructor. Training is available from Royal Arms. Royal Arms also offers door breaching standoffs, barrels with standoffs installed, and custom breaching shotguns.

Breaching Doors are available that allow for low-cost training and practice. The Breach Door from MGM Targets, for example allows you to breach mechanically, thermally, ballistically, and some limited explosive breaching. And all this can be accomplished quickly with standard 2X4 and 2X8 wooden blocks. The design allows it to be quickly set up with conventional locks, chains, rebar, or simple wood screws.