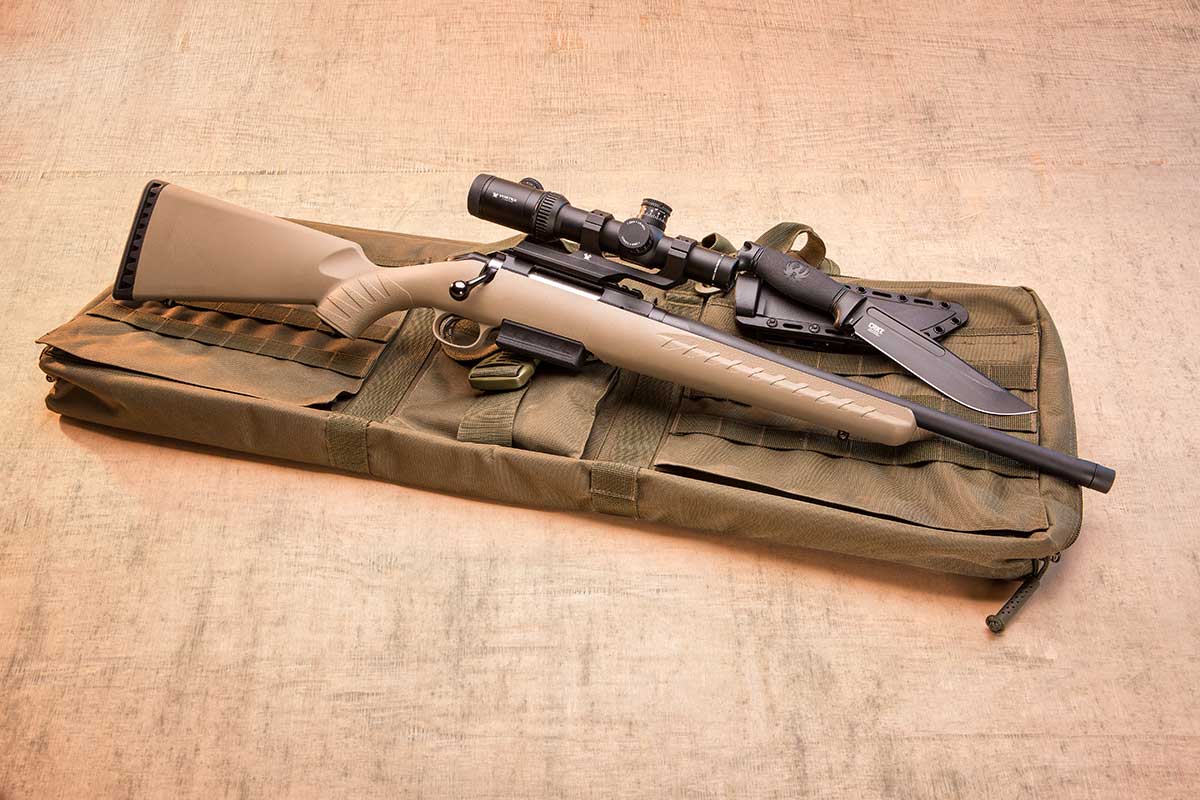 The .450 Bushmaster is descended from the “Thumper” concept popularized by Jeff Cooper. Cooper was not a fan of the 5.56x45mm NATO round and envisioned a need for a large-bore cartridge in a semi-auto rifle that would provide one-shot kills on big game animals at 250 yards.

Bushmaster Firearms worked closely with Hornady and the .450 Bushmaster “Thumper” was born.

Hornady’s load for the .450 Bushmaster (.450 BM) consists of a 250-grain FTX bullet leaving the muzzle at around 2,200 feet-per-second (fps) with almost 2,700 foot-pounds of energy. This actually exceeds the ballistics of the .45-70 Government round loaded with the Hornady 250-grain MONOFLEX™ bullet.

I received the first production Bushmaster XM-15 rifle chambered for the then-new cartridge. A few weeks after receiving it, I shot a large razorback while hunting in Texas.

As the hog crossed in front of me at a full run, I put the circle-dot reticle of the Leupold CQ/T on the nose and pressed the trigger, hitting just above the shoulder. Feral hogs are not easy to kill, especially one that’s fully adrenalized, but the hog went down with a single hit. I became an instant fan of the cartridge.

In recent years, there have been reports of large elk and even bison taken with the .450 BM. The cartridge is capable of taking any big game in North America.

Ruger introduced a rifle chambered for the .450 BM. With Ruger’s expertise in AR-type rifles, they could easily have gone with the platform the cartridge was designed for. Instead they opted to go with a bolt-action rifle from the popular American Series, specifically the American Ranch Rifle. I think it was a good choice.

The American Ranch Rifle is a short, handy rifle, measuring only 36 inches from muzzle to buttpad. Due to the large bore size removing more steel, this rifle is slightly lighter than other Ranch Rifles, weighing in at 5.5 pounds.

Also contributing to its light weight is the Ranch Rifle’s synthetic stock. The stock color is close to Flat Dark Earth and has texturing with unique serrations on the forend and pistol grip area. The pistol grip cap is black with a red Ruger logo. The black buttpad is a soft, but not spongy, rubber. Sling studs are located at the front and rear of the stock.

Ruger American Ranch Rifle ships from the factory without sights, but has a five-inch Picatinny rail that lets the end user mount optics of their choice. Production models will have a factory installed muzzle brake as shown here. Photo: Sturm, Ruger & Co., Inc.

The barrel and action are matte black, though the bolt handle is blued. The one-piece bolt has three heavy lugs. Bolt throw is 70 degrees, providing good scope clearance, while dual cocking cams allow the action to be worked effortlessly for the shoulder. The bolt handle is smooth, which equates to fast, efficient manipulation.

The thumb safety is well placed below the bolt and can be used with equal aplomb by either a right- or left-handed shooter. A cocking indicator directly above the safety extends from the bolt when the rifle is cocked.

The rifle has Ruger’s Marksman Adjustable™ trigger, which is user adjustable between three and five pounds. The trigger pull on the test rifle broke cleanly and consistently at 3.5 pounds as measured by a Lyman Electronic Trigger Pull gauge.

The cold hammer forged barrel is 16.1 inches long with a 1:16 twist. The muzzle is threaded (11/16×24) for use with a suppressor or other muzzle device. The rifle comes with a cap to protect the threads when a muzzle device is not installed.

Sights are not provided with the Ranch Rifle, but it has a factory installed five-inch aluminum Picatinny rail, so the user can mount the optics of his choice.

The magazine is made from a tough polymer, and a spring-loaded magazine release is incorporated into the front of the mag. The magazine well has a slight bevel to aid in inserting the mag.

Due to the diameter of the cartridge, magazine capacity is three rounds for a total on-board capacity of four rounds. The tip of the cartridge is approximately ½ inch from the front of the magazine, but due to the generous length of the feed lips—1¾ inches—the cartridge stays in place until it is guided smoothly onto the feed ramp.

Rifle outfitted as used in the evaluation. Indicator above safety is exposed when rifle is cocked.

While powerful, the .450 BM is optimally a 200-yard cartridge. With this in mind, I wanted a low-power scope that would enable me to keep both eyes open to perform a snap shot up close and provide a wide field of view. A variable-power scope would let me dial up to a higher power for a more precise shot at distance.

With this criterion, I decided on a Vortex Viper PST 1-6X24. This optic has a 30mm tube to allow ample light transmission, a field of view of 98 feet at 100 yards on 1X, and a four-inch eye relief. It’s fairly compact, with a length of 9.7 inches, and weighs 14.4 ounces.

The Viper PST has an illuminated reticle with ten brightness settings. The illumination is turned off between each setting, and runs on a CR 2032 battery.

The scope uses Vortex’s TMCQ reticle, which is a circle broken down into four segments with a small dot in the center. It has subtension lines for determining holdovers, range estimations, and moving target leads.

The Viper PST was mounted in a Vortex one-piece mount. With the scope installed, the Ranch Rifle is still fast handling, tipping the scales at around six pounds. Vortex Viper PST 1-6X24 in Vortex one-piece mount was chosen for the evaluation. Overall fit and finish were quite good, but machining marks were visible on the inside of the receiver on the sample rifle. Although the bolt functioned smoothly, it operated with a grating sound due to the machining marks—not like fingernails on a blackboard, but still noticeable.

Factory specifications for the .450 BM are based on a 20-inch barrel, so I used a PACT Professional chronograph—firing a 20-round string—to establish the velocity out of the Ranch Rifle’s 16-inch tube. I was a bit surprised to find the shorter barrel only lost 15 feet-per-second (fps) from the factory published specs. Ammo was Hornady 250-grain FTX. I shot the Ranch Rifle for groups from prone using a Harris bipod. I fired five, three-round groups and came up with an average group size of 1.36 inches. The smallest group was .79 inch measured center-to-center. With the big .45-caliber holes, it was almost a one-hole group. Not bad at all.

In contrast, my Bushmaster AR shoots about 2.5-inch groups on a good day. Still “minute-of-hog,” but almost twice the group size the Ranch Rifle turned in.

Considering that you’re shooting a 250-grain bullet travelling at 2,200 fps out of a light rifle, recoil is quite manageable. I’d put it roughly in the same class as a .30-06 firing a 180-grain bullet.

I went on a hunt at the Dunton Ranch in Northern Arizona and filled my tag with a nice Corsican Ram. Just like the hog in Texas it went down and stayed down with one shot.

The Ruger Ranch Rifle is a light, fast-handling rifle. Chambered in .450 BM, it is not a precision rifle by any stretch of the imagination, but it’s sufficiently accurate for the task at hand, and will take any game in North America. I send the majority of firearms I test back to the manufacturer, but this one is a keeper.

[Editor’s note: above evaluation was based on an early version. Production Ranch Rifles in .450 Bushmaster will have a factory installed muzzle brake.]

As with all centerfire cartridges I own, I reload for the .450 BM. In this case, it is not only to save a few dollars and tailor loads to my rifle, but because due to supply and demand, not a lot of gunshops stock it. None in my area do.

The .450 BM is a straight-walled case with a rebated rim that headspaces on the case mouth. It is important not to use a heavy roll crimp with bullets that have a cannelure, as this can create potentially dangerous headspace problems.

I use a Hornady four-die set with Hornady’s 250-grain FTX bullet, which does not have a cannelure, and a taper crimp.

My powder of choice for the .450 BM is 35.4 grains of Hodgdon Lil’ Gun for about 2,100 fps. I normally use CCI #400 small rifle primer, but I have also had good luck with WSR (Winchester Small Rifle) primers. Finding ammo in almost any caliber is difficult right now—doubly so with rarer cartridges like the .450 Bushmaster. Rolling you own can alleviate the shortage and save money.