Criminal Detection At Its Finest 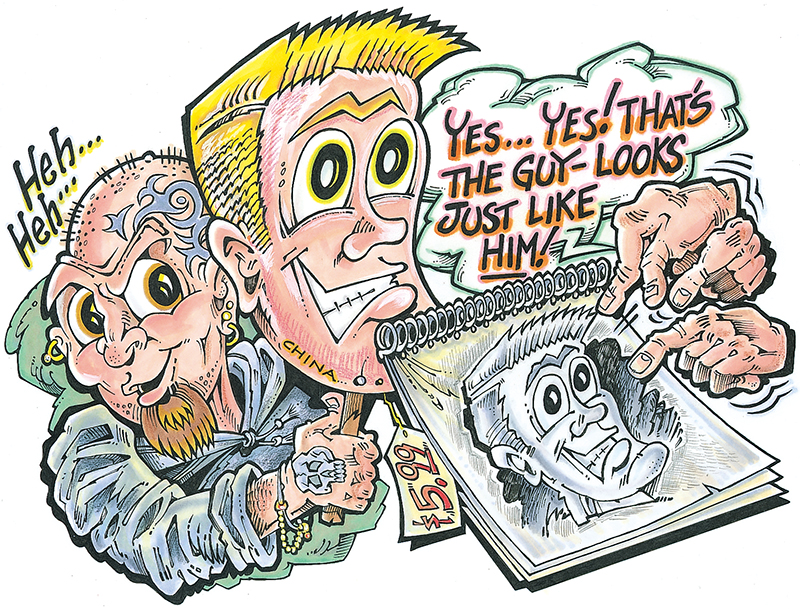 Last November, following a shooting in Fort Bend County, Texas, investigators were initially pleased there were several witnesses who saw the shooter’s “face.” The problem was, the face they saw was one of a man wearing a full-face, lifelike Halloween mask. Undaunted, they brought in a sketch artist who, with the help of the eyewitnesses, produced what all agreed was a pretty darn good likeness of somebody wearing that Halloween mask.

If that doesn’t seem pointless enough, not to mention the expense involved, consider the Fort Bend Sheriff’s Office then distributed the artist’s sketch to the media. A fitting statement might have read, “If you see somebody who looks like this, it might be our suspect. Then again, it might not. Call us anyway.”

Did anybody think of simply buying the same mask for maybe $5.99 and just takin’ a photo of it? Nope, makes too much sense.

Finally Got The Message

For several years, the government of Brazil has been aware of the existence of a lone tribesman living deep in the tangled forests of its western state of Rondonia. He is apparently the last surviving member of a tribe that had eluded contact, study and hordes of anthropologists eager to “discover” them. He has been seen on rare occasions, and detected by airborne heat-and-movement sensors, but the last human spotter who got a glimpse of him also got an arrow in his chest. We think that was the Lone Ranger’s way of saying, “Leave me alone, will ya?”

Now Brazilian officials have decided to do just that. They have marked off the approximately 31 square miles that seem to form the Lone Ranger’s hunting grounds, and are taking steps to assure nobody trespasses to bother him — or collect arrows the hard way. Other than a flyover with sensors now and then to determine if he’s still alive, the policy is — leave him alone!
I wonder how I can get into a program like that …

Some people keep their IDs in their wallets. But Royce Spottedbird Jr. wanted his name to be more visible. He had it tattooed on his neck.

When the 23-year-old was pulled over for a minor traffic violation in Butte, Mont., though, his only thought was about a possible warrant for his arrest. He told the officer he didn’t have his driver’s license with him, and gave a phony name. Then, the cop asked, “Well, then, why is Royce Spottedbird Jr.’s name on your neck?”

He was arrested for obstructing justice and giving false information to a peace officer. And the icing on top? There was no warrant out for him — not yet.

At almost 50 years of age, bush-league crook Nathan Pugh finally got to try out for the Major League of Crime, but quickly proved he still couldn’t hit a curve ball.

Nathan shuffled into a Wells Fargo bank branch in Dallas, and handed the teller a note advising he had a “bom” and would presumably set it off if she didn’t give him piles of money. The teller apparently gave him a skilled once-over to assess his cognitive abilities — or lack thereof — and then patiently explained she could not hand over large amounts of cash without seeing proper ID.

First, she got his Texas state ID card, and then, with a little persuasion, got him to cough up his debit card, issued appropriately enough, by Wells Fargo! Both cards were his, of course, bearing all necessary ID info.

At this point, it seems Pugh finally realized he’d been snookered and he took off for the door, only to find the police striding in. But he didn’t give up — oh, no! He grabbed a hostage — which turned out to be the wrong hostage: a woman carrying a small child. This is an act just about as smart as tormenting a momma lion nursing a cub. She took Pugh to the floor before the cops could touch him.

One of the lost rules of bank robbery is, “Never rob your own bank.” When Theodore Davenport Jr. stopped into the Harrisburg, Penn., branch of PNC Bank to check the balance in his account, the teller recognized him as the same guy who had pulled two armed robberies of the branch a month earlier. And no, it seems he had not worn a disguise.

We’re thinking he could have gotten away with another robbery easier than getting away with checking his balance. Somebody might point that out to him in prison, probably ending the explanation with “ya moron.”