DESIGNATED MARKSMEN | The Need And The Training The Designated Marksman (DM) concept is nothing new. “Sharpshooters” were used as far back as the American Revolution, with better shots assigned to target officers. My father jumped on D-Day with the 101st Airborne. One private carried an ‘03 Springfield with a Weaver 4X scope, and was used to shoot at ranges a little far for the M1 Garand with iron sights. He wasn’t considered a “sniper”, just a good shot who could reach out to touch someone.

The DM fills the gap between patrol and SWAT. In Alaska, it can easily take 24 hours for a team to fly to remote areas. I first set up a DM class while I was with the Alaska State Troopers, to fill this void. The officers on the scene may urgently need the ability to hit a target at longer range than the patrol officer does, and a variable scope may give the officers that edge. The officers in a small, rural department might be better served with training focused on what most cops really do—stand behind a tree for hours, then take a shot at reasonable distances.

There’s always been an argument that scopes don’t help you shoot better, they just let you see better. I’ll leave that argument to smarter guys than me. I know that I can usually get better hits when I shoot things using a scope, and good hits are what counts.

My go-to AR is a Colt 6920, set up with a Leupold 1.5X5 variable, and an Aimpoint Micro T-1, both in LaRue QD mounts. The LaRue mounts allow either optic to be removed and re-mounted without losing your zero. I’m told that the Marines selected Designated Marksmen (DM) in Afghanistan, equipped with an M16 A2, 20-inch barrel, to reach out and touch terrorists. My source stated that they shoot a bonded, 62-grain soft point to great effect out to 600 yards.

As soon as you say “scope”, too many guys start talking come ups, MILS, match ammo, windage, clicks etc., none of which apply to the DM. The DM takes his rifle or carbine, sighted for 50 yards, and shoots it as-is at point-blank range. Point-blank does not mean close; it means “…any distance over which a certain firearm can hit a target without the need to compensate for bullet drop.” Most coppers don’t have the time, equipment, or skill to accurately estimate range and make adjustments, so they need to know they can hit with the gun out to reasonable ranges as it comes out of the trunk. 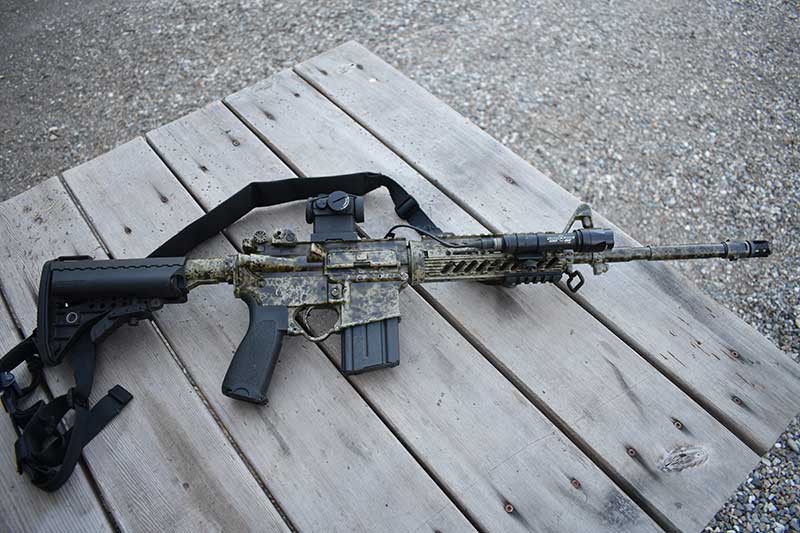 If your terrain and weather call for a .308, the LaRue PredatAR, set up like it’s .223 brother, is one of the best on the market.

I shoot mostly 55-grain ammo, and zero at 50 yards. At 100 yards the point of impact is about 1.5 inches; highest point of the trajectory (the maximum ordnant) is 2.0 inches high at 200, back to zero at about 225, and 4-6 inches low at 250. I get it, we’re supposed to shoot for the upper chest, but I doubt the goblin will notice the difference if he takes one in the gut.

If you need to hit the goblin in the eye at 100 yards, you need to hold a little low. For a body shot, it’s not an issue, from 25 to 250 yards. The average human male is 17 inches from throat to belt; this allows for a point-blank shot (center mass) from 25-250 yards with no hold-over (or under). In three recent classes, patrol officers were hitting steel at 25-250 yards, with the first shot. I ranged hallways and gyms in an active shooter class, and found ranges to 125 yards. This could be a good place for some DM application.

I mentioned the set-up I currently use to teach this class. The Colt mentioned was a “naked AR”, which comes with no furniture. I like the VLTOR stock, which allows a better cheek weld, replaced the trigger with an Elftman “duty” trigger, and use good glass. I’ve tried using a magnifier with a red dot and didn’t like it. I get better identification and clarity with the scope. I use Leupold for the consistency and the lifetime warranty. Olympic Offhand; looks stupid, but great when a telephone pole is your only cover. Squat; 75% of the world’s population eats, fights, and poops from this position. Cross leg: if you’re flexible, easy to get in/out and very stable.

I did a class in Okanagan, Washington, in May of this year. The town is in the Columbia River valley and it gets a lot of wind. On Day Two, we had winds gusting to 25 mph, quartering from the left rear. We noticed that beyond 200 yards the bullets began to drift to the right, so a class on wind adjustment has been added.

The AR platform in .223/5.56 is the standard police rifle today, but officers working the open plains and deserts should consider a .308 platform. I have a LaRue Tactical PradatAR in .308, 18-inch barrel, equipped with the same glass. I shoot 165-grain Federal Tactical in it and am very happy with the performance. I plan to use it next class and will report back on its performance.

The two factors that you should consider are bullet weight and barrel length. The tacti-cool ten-inch CQB shooting 40-grain goblin-killers is great inside 50 yards, but may be found wanting at longer range. For most police tasks, a 16-inch carbine from a reputable builder will be all most departments need. The platform is a good balance of accuracy, flexibility, and lethality, from five to 250 yards.

Position shooting and support for the rifle are important to the DM. From zeroing to field application, get something stable under the forend: a bipod, ruck, etc. will make life easier.

To use positions and support, use the time-honored Smith Scrambler. This simple training aid allows at least twelve different firing positions, right and left side of cover. The shooter uses the wood for support when they think it helps, and use bone support when shooting from prone. Training scenarios should include car hoods, trees, elevated position—anything that could simulate in a field environment. How not to use cover! Note the legs extending past the barricade.

Some instructors get all hinky when you talk about supported shooting, but if it works on critters, it’ll work on bad guys. As we all know, take care not to rest the barrel on the support; use the forend, preferably with a hand or a pad under it.

Any rifle training starts with a confirmation of zero. I taught an NRA patrol Rifle class in North Charleston, S.C. a few years ago. The rangemaster showed me the ten0-yard zero, which I use as a starting point. The target is stapled onto the backer, low to the ground. There are two dots, centered on a vertical line, 2.5 inches apart- the mechanical offset for an AR. The shooter aims at the upper dot, fires three, then adjusts his optic/sights. This saves all the time of grounding the rifle, walking 50 yards to the target, verifying hits, returning, adjusting, shooting, repeat. Once the hits are in the lower dot, zero is verified at 50.

Training remains at 50 yards for the first morning, and includes reloads and malfunction clearing. Position shooting includes standing, three sitting, three kneeling, squatting, and three prone are used for the rest of the morning. The afternoon is spent using these positions, on steel, out to 250 yards. Day Two continues, with emphasis on shooting from elevated and lower positions, and fieldcraft—if you can see him, he can see you, so avoid skylining, color, movement, reflection, etc.

One advantage to a department DM capability is limiting liability exposure. One trained officer, making one good shoot, resulting in one down goblin. Everyone wins! It’s way better than what once happened in Idaho- twelve officers fired over one-hundred (100!) rounds and eventually wounded one suspect. Where’d the rest of the rounds go?

Departments and armed citizens should consider a DM capability. Look at what your guys really do, not what is cool, and plan and train accordingly; you might be surprised at how well a Designated Marksman works.

The author is a retired Alaska State Trooper, Army veteran, and martialist.