Although dry fire training is essential to improving one’s skills as a shooter, dry fire with most semi-autos has its issues. Racking the slide or charging handle after every trigger press to reset the hammer restricts training and introduces concerns about operating a semi-auto firearm by those who may not understand its mechanics.

Mantis Tech has eliminated these issues with its Blackbeard™ AR-15 trigger auto-reset system. It automatically resets the trigger between shots, eliminating training scars and allowing for more realistic training. It’s capable of up to 10 dry fire shots per second. It works for both semi and full-auto rifles. Blackbeard Auto-resetting Trigger System takes dry-fire training with you AR to next level. There’s no modification to your firearm. It doesn’t alter trigger pull and reset.

The Blackbeard is a drop-in replacement for your bolt carrier group (BCG) and magazine. There’s no modification of the firearm, allowing for a simple transition from work to training and back.

There’s no alteration of the trigger weight, break, and reset. There’s no need to run the charging handle after every shot. Dry fire training is more realistic, and the previously mentioned issues are eliminated.

The Blackbeard now supports both direct impingement (DI) and piston-operated AR-15 platforms. It’s compatible with most but not all AR-15 pattern firearms. It’s not compatible with Fostech Echo™ II trigger, Springfield SAINT Victor™ rifles, or lowers that have a sear block. It may not work with an 80% lower. Although the Blackbeard is currently only available for the AR-15 platform, it will soon be available for the Sig Sauer® MCX™ platform.

The Blackbeard employs an electromechanical actuator assembly to automatically re-cock the hammer and reset the trigger every time a trigger break is detected. It’s simple and reliable. The Blackbeard is easy to install. No tools are necessary. It simply replaces your bolt carrier and magazine, making for simple transition.

Power is provided by a lithium-ion rechargeable battery pack located in the Blackbeard “magazine.” This allows for a larger battery pack, eliminating any training halt resulting from a discharged battery. The battery pack is good for up to 100,000 “shots” per charge. The Blackbeard magazine battery pack is good for up to 100,000 dry fire shots per charge. It is recharged via a Micro-USB port. Micro-USB to USB cable is included.

Red LED bars on top of the magazine indicate the charge level. Five bars signify it’s fully charged. A blinking bar indicates it’s charging. You can check the battery charge by pressing a small “lever” on the magazine.

The battery pack is charged via a Micro-USB port on the side of the magazine. A Micro-USB to USB cable is included. The cable plugs into any USB 2.0 outlet, so you charge it virtually anywhere.

The body of the Blackbeard BCG and magazine are made from a durable, bright red injection molded polymer. The high visibility red color makes it easy to tell at a glance that the firearm has been converted for training. It’s impossible to chamber or fire a live round with the Blackbeard installed. The Blackbeard BCG has an integral molded simulated charging handle. It doesn’t allow you to cycle the bolt to practice malfunction clearance drills or practice magazine changes from the open bolt.

The Blackbeard BCG has an integral molded simulated charging handle. Since it’s not rackable, it doesn’t allow you to cycle the bolt to practice malfunction clearance drills or practice magazine changes from the open bolt. These are trade-offs with the Blackbeard.

The Blackbeard is available with an optional integral laser shot indicator that fires a laser down the barrel every time the trigger is pressed. It provides a visual indication of where the shot would have landed. It may be employed with dry-fire laser training systems such as the excellent Mantis Laser Academy™.

Laser-enabled Blackbeard models are available with a red, green, or infrared (IR) “eye-safe” laser. There are fundamental differences between the colors that need to be considered.

The human eye is most sensitive to colors in the green spectrum, making a green laser more visible on a target than a red laser in bright light conditions, everything else being equal. Both colors are easily discernible in reduced light conditions. An IR laser isn’t visible to the naked eye and requires a night optical/observation device (NOD) to see. 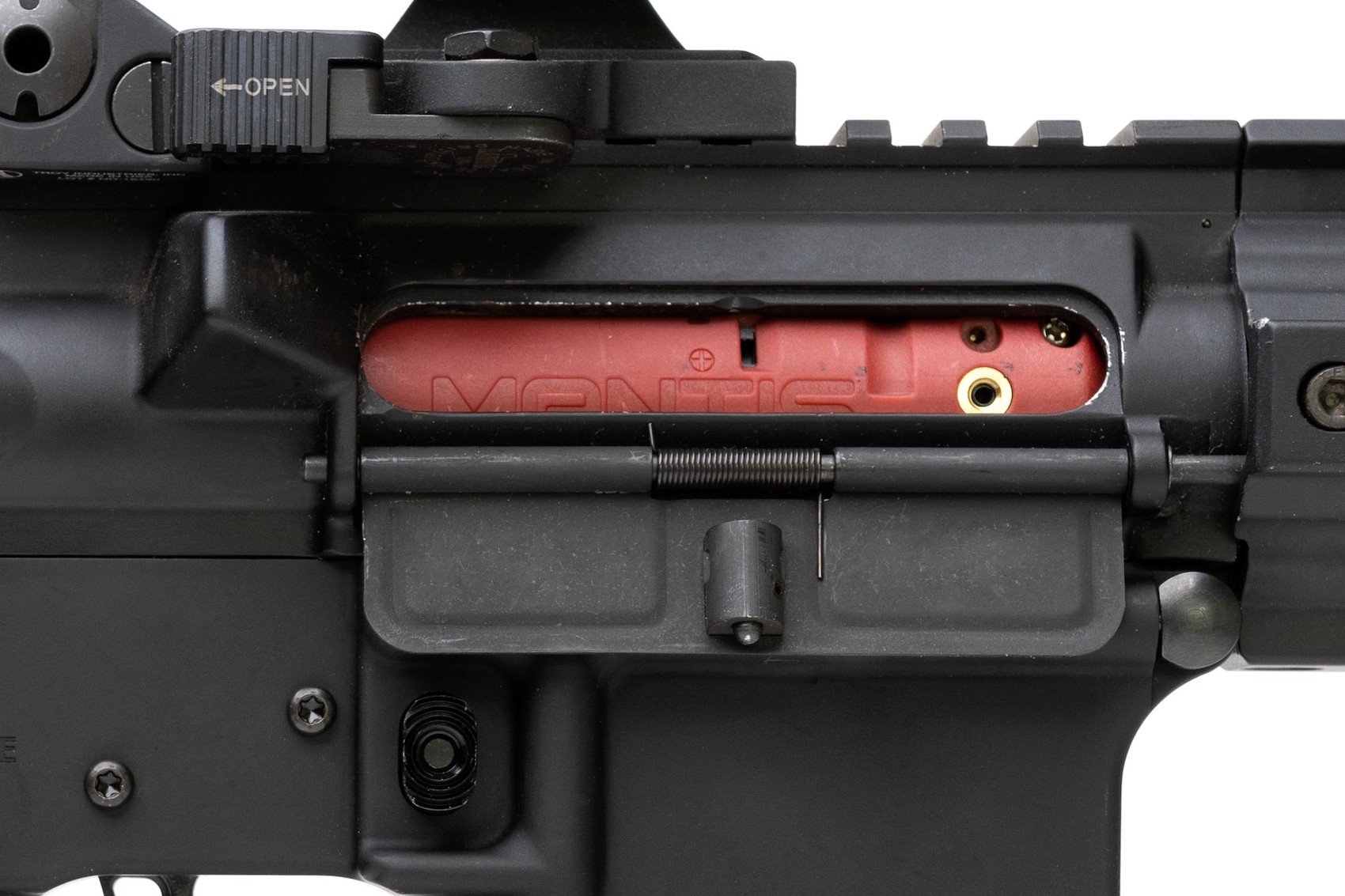 Mantis zeros the laser and tests each Blackbeard at the factory. Adjustment of the laser can be made with the included Allen wrench. Adjustments can be accessed through the ejection port.

Mantis tests each Blackbeard at the factory, which includes mechanically zeroing the laser. The zero may need to be adjusted for various firearms and different sights/optics. You can make adjustments by going through the ejection port with the Blackbeard installed. It’s easy to do using the included Allen wrench.

Mantis now offers the Blackbeard with an integrated MantisX™ Shooting Performance System. It analyzes your shooting in real time, collecting thousands of data points per second. It’s a one-of-a-kind training system that’s like having your own personal shooting coach. You select Blackbeard in the MantisX app instead of either live or dry fire.

The MantisX smart sensor continuously tracks the movement of the firearm before, during, and after every shot. A three-axis gyroscope and three-axis accelerometer in the sensor gathers movement data during the trigger pull. It does this at a sample rate of hundreds of times per second. The data is transmitted in real-time via Bluetooth® to the MantisX app, which is available for both iOS® and Android® devices.

Working together, they analyze every shot and generate actionable data. They tell you what you may be doing wrong and offer suggestions on how to correct it to make you a better shooter.

Mantis provided me with a BlackbeardX with green laser and integrated MantisX. There isn’t anything else like it on the market.

The Blackbeard received the prestigious NRA Golden Bullseye Award as the 2022 Accessory of the Year. According to Mantis, both the Blackbeard and the MantisX systems are used by the US Marine Corps, US Army, and Special Forces.

Mantis has outstanding customer service. They’ll take care of you if you purchase any of their products and have an issue. So, giving the Blackbeard a try is no risk.

MSRP for the standard Blackbeard with no laser is $199. The red laser-enabled model has an MSRP of $219. The green and IR laser models have an MSRP of $249. Integrating the MantisX adds $100 to the cost of each Blackbeard model.

The Blackbeard comes with a hard-shell zippered carrying case with a fitted closed-cell foam interior and internal mesh pocket. The Blackbeard is made in the USA and is covered by a two-year limited warranty.