It takes time and practice to become proficient with firearms. It’s an art that needs to be developed. And no matter how finely tuned a shooter you have become, shooting is a perishable skill. This is especially true with handguns.

The current ammo shortages and corresponding high ammo prices have resulted in changes to firearms training. One change has been the increased use of dry-fire training. Dry-fire training allows shooters to train more often and without going to the range. Even before the shortages, dry-fire training was an essential component of improving shooting skills and building correct “muscle memory.”

Although not a substitute for live-fire training, dry-fire training allows one to work on all of the fundamentals, including draw and gun presentation, sight alignment, sight picture, breath control, trigger pull, and follow through, as well as malfunction clearance drills and reloading. And as we all know, shooting is a perishable skill. Even the most experienced shooters need regular practice to maintain their skills.

There are a number of laser firearm training systems available from which to choose. Capabilities and pricing vary greatly. All of them can enhance your training. I recently received the Mantis Training Laser Training Academy™ Standard Training Kit from Mantis Tech LLC for evaluation. Laser Academy system utilizes a laser training cartridge that drops into the chamber of your weapon, delivering a light beam down the barrel every time the firing pin strikes the round. Mantis Blackbeard auto-resetting trigger system for AR-15 offers a variety of laser options. It can be paired with the Laser Academy. Laser Academy provides a higher level of dry-fire training with your actual guns and holsters, with results you can see. Kimber KHX Custom .45 ACP pistol shown.

The Laser Academy system utilizes a caliber-specific Pink Rhino™ Laser Training Cartridge that drops into the chamber of your weapon. It delivers an eye-safe laser pulse down the barrel every time the firing pin strikes the cartridge. The system uses physical targets and works in conjunction with your Apple iPhone®, iPad® or Android® phone’s camera, scoring the laser “shots” using the Laser Academy app. It offers a variety of drill options. Laser Academy is simple to set up, easy to use and offers great flexibility.

The Pink Rhino Laser Training Cartridge is available in 9mm, .380 ACP, .40 S&W, and .45 ACP. It has a bright red Class 3A (<5mW) 630-670nm laser that’s powered by three LR626 button batteries (included). It also functions as a snap cap, so there’s no worry about damage to your gun. Dual O-rings ensure it is centered for accurate feedback. It has a no-rim design that is designed not to extract when the slide is racked, allowing for a full range of dry-fire drills. It also prevents the accidental loading of a live cartridge. It should be noted that the Pink Rhino Laser Cartridge is not compatible with Ruger® SR-Series™ or Hi-Point® pistols.

If you want to be able to do dry-fire practice with your AR-15 without having to run the charging handle between shots, Mantis also offers its new Blackbeard™ AR-15 trigger auto-reset system. It is a drop-in replacement for the bolt carrier group and magazine that automatically resets the trigger between shots. It’s capable of up to ten shots per second. Available with a variety of laser options, it can also pair with the Laser Academy training system.

The Laser Academy can also be used in conjunction with other manufacturers’ laser training cartridges and with dedicated laser training guns such as the Next Level Training SIRT and Smart Firearms Laser Training Pistol.

The Laser Academy “Smart Targets” are designed specifically for automatic detection and automatic shots scoring with the Laser Academy app. The targets come printed on thick 14-point card stock. You can also manually download and print the targets for free from the Mantis website. A new Manual Targets tutorial in the Laser Academy App tells you step-by-step how to make use of custom targets.

• Open Shooting-Single Target: Basic target shooting with scoring and the ability to store sessions to track your progress.

• Shot From Guard/Low Ready, One Shot: Starting from a prompt, this mode times your shot and tracks accuracy in single-shot sessions.

• Duel/Single Shot: You and a training partner compete to see who has the fastest draw and eagle eye. 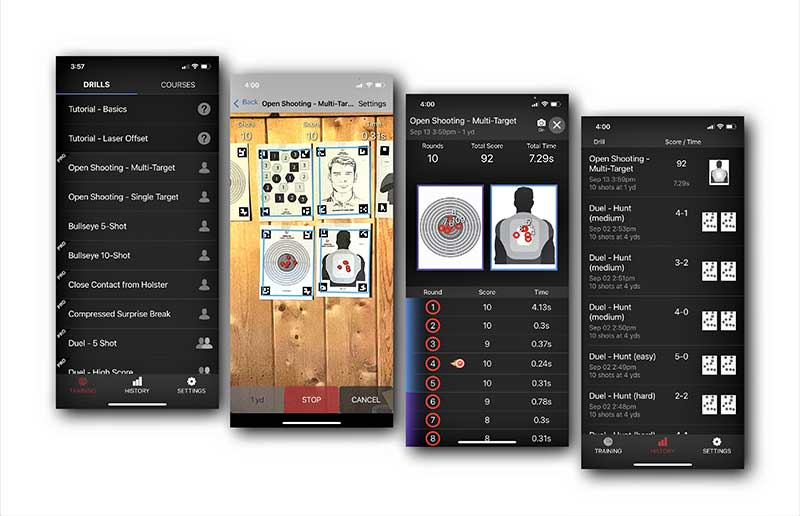 Laser Academy is simple to set up and provides flexibility for when and where you can practice. Laser “shots” on physical targets are read by your phone or tablet and scored accordingly, per mode. Laser Academy components are available separately or in complete kits with everything that you need. Laser Academy Standard Training Kit is shown.

The PRO modes, available as an in app purchase or free with the “Standard” or “Portable” Laser Academy Portable Training Kit, are what really set the Laser Academy ahead of all the competing laser training systems in both variety and value.

The PRO modes (at the time of writing) include the following:

• Duel – Best of Five: First shot on targets wins a point in best out of five competition.

Shot From Guard/Low Ready – Multi-Shot: Starting from a prompt, this mode measures your reaction time and shot accuracy.

• Compressed Surprise Break: Firing from a prompt, the goal is improved reaction speed and shot accuracy.

• Duel – Five Shots: From a prompt both shooters draw and fire, with first on-target earning a point. A fun way to improve speed and accuracy.

• Duel – High Score: Fastest accurate shooting round against an opponent.

• Holster Draw: Fast and accurate shot from holster. Each shot is placed, scored, and timed.

• Holster Draw – Par Timed: Fast and accurate shot from holster, against a par time. Shot must break before the par whistle.

• Hunt and Duel – Hunt: Add some cognitive challenge to your marksmanship training.

Mantis plans on adding additional features and capabilities within the app. The company pushes out frequent app updates, typically at least once a month.

With the purchase of either the Standard or Portable Laser Academy Training Kit or with an in-app purchase, you unlock access to the entire library of PRO modes. This not only includes existing modes but future releases, as well, at no extra charge.

Another great feature of the Laser Academy is that it allows the user to sign up and automatically log his or her training sessions online, either for private use or to share with other Laser Academy users. It’s free!

Although all of the Laser Academy components are available separately, I recommend going with either the Standard or Portable Laser Academy Training Kit. They offer the greatest value by far.

The Standard Training Kit comes with the following:

To sum it all up, the Mantis Laser Academy system is an outstanding training tool that’s on the cutting edge of firearm’s training. MSRP for the Standard Training Kit is $139.00. The Portable Training Kit has a MSRP of $99.00.