O.F. Mossberg and Sons is the oldest family-owned firearms manufacturer in the United States opening their doors in March.

Best known for their shotguns and rifles, it is virtually unknown that the first firearm produced by Mossberg was a handgun—the Brownie.

Designed for trappers and self-defense, the Brownie was somewhat of a cross between a derringer and pepperbox. The break-action .22 caliber pistol had four 2.5-inch barrels (4.5 inches overall), and a double-action trigger. The pistol’s firing pin rotated around the four barrels. Very innovative for the time—and even today.

This past summer, along with a large cast of other writers and editors, I was invited to attend a Mossberg new product rollout held at Gunsite, the focus of which was the latest addition to Mossberg’s MC (Mossberg Carry) line of modern pistols—the MC2sc. Mossberg’s first handgun, the Brownie, was somewhat of a cross between a derringer and pepperbox.

The introduction of the Mossberg MC2sc (subcompact) follows the popular MC1sc and MC2c (compact) pistols.

The MC2sc shares many of its siblings characteristics.

Slides are stainless steel, with Black DLC (Diamond-Like Coating) finish. Angled serrations for positive slide manipulation are on both ends of the slide. The rear of the slide has a cross-cut slot milled across the other serrations that makes purchase on the slide even more positive. Integrated into the slide is the Mossberg STS™ (Safe Takedown System) (more on this later).

Frames are high-tensile strength glass-reinforced polymer that feature Mossberg’s signature aggressive grip texturing and palm swell for a confident, firm grip under a variety of conditions.

There is a small rise on the frame behind the magazine release that prevents accidental release of the magazine—never a good thing. The face of the mag release has numerous raised projections for a good purchase.

The triggers have a flat-profile and integrated blade safety. Trigger guards are oversized that accommodates all hand sizes and even with gloves.

One significant change is that the MC2sc comes with an optic-ready slide for a mini red dot sight (MRDS).

Mossberg has milled the top of the slide so the MRDS fits low and allows co-witnessing with the irons sights, removing the need to purchase higher sights. The slide will accommodate most common mini red dots including Jpoint and Shield footprints.

From the factory the MC2sc comes with a cover plate over the optic-ready surface which can be removed with an included hex wrench.

The MC1sc used Clear Count™ single-stack magazines; a six-round capacity and one seven-round. For the MC2sc Mossberg engineers abandoned the thicker plastic magazines and opted to go with steel double-column mags that only increased the width by an unnoticeable 0.07”. The MC2sc comes with an 11-round flush fit mag and an extended 14 rounder that uses a slip-on adapter to fill the between the bottom of the frame and magazine baseplate.

As a side note, if the slip-on adapter is removed the 14-round mag will also fit in the MC2c.

A Massachusetts-compliant version and a 10-round magazine for states that limit magazine capacity are available. In order of their introduction, top to bottom: MC1sc, MC2c and MC2sc. 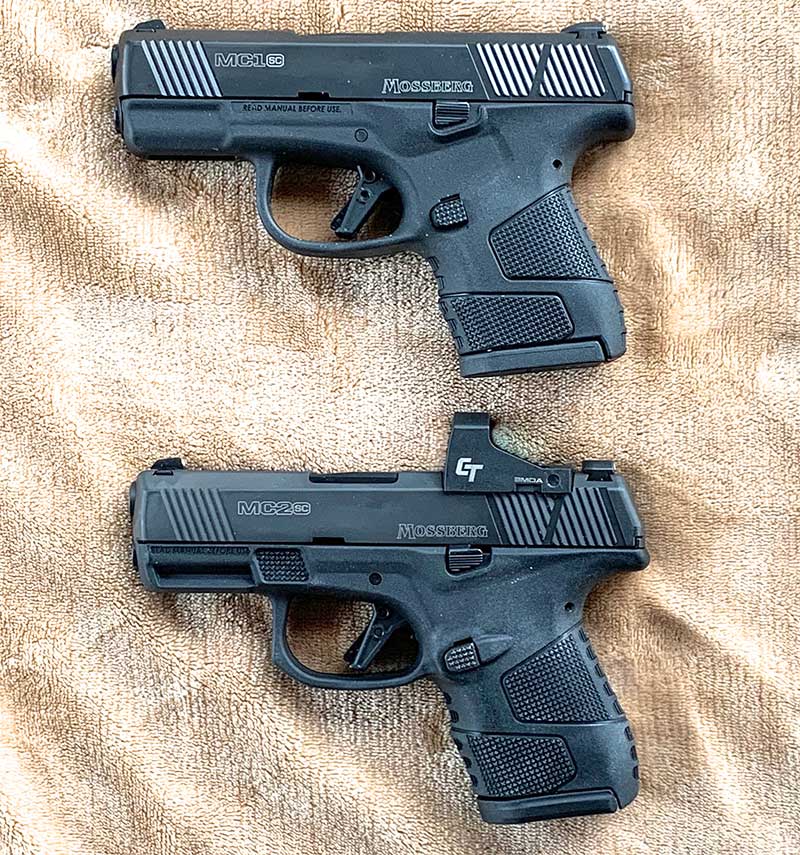 MC2sc has the same footprint as the MC1sc. Mossberg’s signature aggressive grip texturing and palm swell for a confident, firm grip. There is a small rise on the frame behind the magazine release and face of the mag release has numerous raised projections for a good purchase. Rear of slide has a cross-cut slot milled across the other serrations that makes purchase on the slide even more positive.

The Mossberg Safe Takedown System makes the MC2sc very easy to disassemble for routine maintenance and the trigger does not need to be pulled to complete takedown.

First remove the magazine and ensure the chamber is empty and lock the slide to the rear. Remove the striker cover plate. Pull back on the slide and ease the slide forward. The striker assembly will protrude slightly from the rear slide.

Remove the striker assembly, unlock the slide and pull it forward off the frame. The barrel and recoil spring can now be removed in the normal manner.

Reassemble in reverse order. It takes more time to read this than perform the procedure.

Hornady provided their 135-grain Critical Duty ammo for the event. In this day and age of ammo shortages with manufacturers working overtime to fill the gap, it’s great to see one step up to provide a large quantity of ammunition to evaluate a new pistol with quality defensive ammo.

To evaluate the MC2sc Mossberg supplied attendees a pistol equipped with the Crimson Trace CTS-1550 optic.

The CTS-1550 is an ultra-compact Open Reflex Sight for pistols with a 3.0 MOA dot. An ambient light sensor automatically adjusts to the lighting conditions and turns the device off when the included cover is used, extending battery life. The battery on the CTS-1550 is located underneath the device, allowing for co-witness despite its compact size. Battery life is 20,000 hours (over 2 years) on a single CR1230 battery.

Firing hundreds of the duty ammo I found the texturing aggressive, but not to the degree it left a “hot spot” on my hand. Felt recoil was light despite this being small pistol. The red dot sight did not lose zero.

In total I would estimate hundreds of rounds went downrange. I only noticed two malfunctions and both of them occurred with me.

I have reached the age that admitting when I make a mistake my ego does not stop me from taking credit for it in print.

I experienced a failure to feed and a Mossberg engineer who observing the class came over to me to see if he could determine what the problem was. The pistol was a bit dry and the engineer applied lubrication to see if that would solve the problem.

A short time later I experienced the same malfunction and this time the engineer offered to replace the recoil spring. I asked him to hold off as I believed I had self-diagnosed what the problem was.

I normally shoot full-size pistols that have enough slide mass to ensure the pistol cycles and thought that maybe I had become spoiled and was “limp wristing” the MC2sc. I consciously tightened up my grip and stance and had no further problems.

I am new to shooting a MRDS-equipped pistol. I have been trained for decades to, “Focus on the front sight, don’t look at the target.” Bringing the pistol up I would search for the red dot, finally place it on target and fire. I was, as Pat Rogers used to say, chasing the dot.

Gunsite instructor Lew Gosnell saw me struggling and asked if I was looking at the target and I told him no. He told me to approach it as I would with a carbine with an RDS: keep both eyes open, look at the target, bring the gun up and just let the dot appear on the target, and press the trigger.

After firing carbines with red dot sights for decades I could hardly believe this had not occurred to me. My speed and accuracy increased immediately. Thanks, Lew If the slip-on adapter is removed the 14-round mag will also fit in the MC2c (shown). Hornady provided their 135-grain Critical Duty ammo for the event.

Back in the classroom Mossberg representatives asked what, if any, suggestions could be made to improve the MC2sc.

A few opined that the magazine release button was too small and sometimes difficult to depress.

Others believed the slide lock was too small and hard to disengage while performing an empty gun reload.

Neither of these bothered me as I was consistently able to depress the magazine release, even under the “stress” of performing an emergency reload.

As for the slide lock, I use the overhand slingshot method of releasing the slide. In fact, the only time I manually engage/disengage the slide lock is when I’m disassembling and reassembling a pistol to clean it.