Introduced in 2017 the Mossberg® 590® Shockwave™ was, and remains, one of the hottest firearms to hit the market. That’s not at all surprising since the Shockwave offers shooters a compact, 14-inch-barreled 12-gauge reminiscent of the legendary Witness Protection Shotgun of the U.S. Marshals Service (USMS) but with no NFA (National Firearms Act) restrictions, confirmed in a letter to Mossberg from the BATFE (Bureau of Alcohol Tobacco Firearms and Explosives).

What makes this possible is the fact that a shotgun that has never had a stock on it so isn’t technically a “shotgun” but a “firearm” in so far as Federal law goes. And if it has an overall length (OAL) greater than 26 inches (the Shockwave has an OAL of 26.37 inches) it’s not considered a NFA Title 1 firearm. Transfers only require the traditional 4473 when purchased from a dealer and, since it’s a pistol-gripped firearm.

The reason for this is that the BATFE considers an OAL of 26 inches or under to be concealable, which would make a 26-inch or shorter a Pistol Grip Only (PGO) shotgun an AOW (Any Other Weapon) and subject to the purview of the NFA. If it meets the mandated OAL to be considered non-concealable, barrel length is irrelevant. Keep in mind this only applies to Federal law. Your state or local laws may differ.

The Mossberg 500® platform has been around for over 50 years with over ten million produced. It has proven to be one of the most versatile and reliable pump action shotgun platforms. It’s the only pump action to meet the rigorous testing requirements demanded by the U.S. military to be declared Mil-Spec. It has seen action in combat around the globe and continues to do so. Forend has a nylon strap to ensure shooter’s hand does
not cover the muzzle and stays in place during recoil. Well-designed anti-jam lifter is visible with the action
open (right). The twin action bars are not visible here.

The Shockwave has a matte-blued finish and features a 3-inch chambered, heavy-walled 14-inch smooth bore barrel with a cylinder bore. It also features a convenient clean-out magazine tube with a 5+1 capacity with 2.75-inch shotshells, gold bead front sight, and web strapped forend to keep the shooter’s lead hand clear of the muzzle and keep it in place during recoil. Weight is 5.25 pounds.

It also brings the OAL of the Shockwave with the 14-inch barrel to just over the required BATFE minimum. Both the Raptor Grip and forend feature a non-reflective black finish. 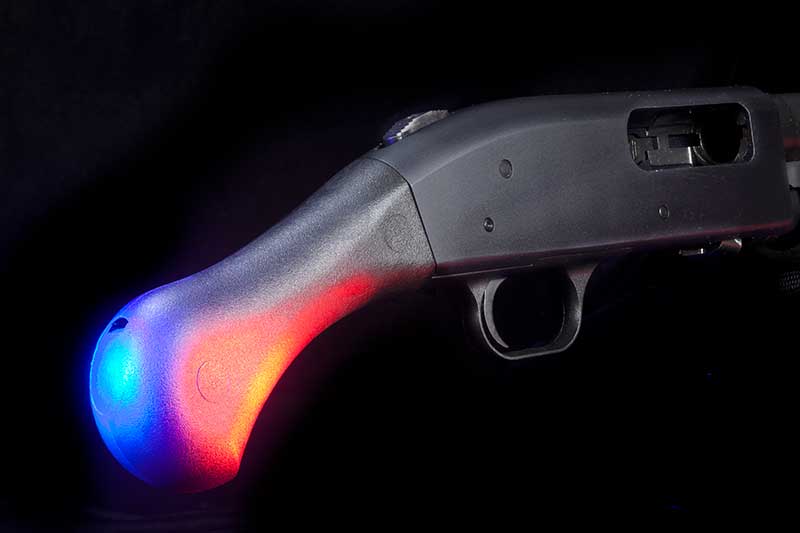 An adapter is available from OPSol of Texas that allows the use of Aguila’s 1.75-inch Minishell™ (not included). The OPSol Mini-Clip™ simply snaps into the loading port of the Shockwave without the use of tools. It’s just as easily removed.

When fitted with the OPSol Mini-Clip, the capacity of the Shockwave is increased from 5+1 to 8+1 with Minishells loaded with buck or birdshot and 7+1 with Minishell slugs.

Shotgun shells are measured after they’re fired. Unfired Minishell slugs are slightly longer than the buck and birdshot Minishells, as they are roll crimped and the slug protrudes a bit.)

It should also be noted that standard shotshells won’t feed from the magazine with the OPSol Mini-Clip in place, but can be loaded into the chamber individually. Tang mounted safety is ambidextrous and many
experts believe it’s location is ideal.

Rather than just thrusting a shell into position, the lifter cradles the shell allowing the bolt to push it straight in the chamber.

My testing of the Shockwave was conducted at C2 Tactical in Tempe, Arizona. Located right off the I-10 freeway, C2 Tactical has been voted Best Indoor Range in Arizona. It has a 25-yard state-of-the-art range with 23 air-conditioned shooting lanes, a new state-of-the-art simulator, full retail store (including NFA firearms), gunsmith services, and much more. It also offers numerous training courses.

The Raptor Grip and forend strap on the Shockwave did a great job of mitigating recoil. The low recoil loads were very manageable and pleasant to shoot. The standard loads were still controllable, but the additional recoil was very noticeable. The magnum loads, as expected, were downright uncomfortable. Low recoil loads are clearly the way to go in a weapon of this type. As NRA Instructor and RSO Aili deGreef of C2 Tactical demonstrates,
the Shockwave is aimed like a regular shotgun.

The Federal ammo with its Flight Control™ wads was the tightest patterning, with 00 patterns averaging around four inches at 50 feet from the Shockwave. The Hornady patterns were just a tad larger, but still outstanding. Both companies make excellent ammo. You won’t go wrong with either.

Functioning of the Shockwave was smooth and flawless. No surprises here as there is no more proven action than the 500. Although I didn’t actually measure it, I would guess the trigger pull to be around 6.5 pounds. The ambidextrous tang mounted safety and Raptor Grip are an ideal combination as if they were made for each other.

The safety was easily manipulated. I have read reports that some users have found that it can be difficult to get adequate thumb purchase on the Mossberg factory safety, especially when gloves are worn. I haven’t had any problems in this regard and prefer the snag-free design of the factory safety.

That being said, Brownells offers a drop-in replacement that will address any concern. The Brownells safety features matte-black oxide finished hardened all-steel construction and is shaped for no-slip operation with larger grooves. At just under 20 bucks, it’s inexpensive too.

There are a lot of misconceptions about firearms like the Shockwave. First off, forget what you have seen on TV and in motion pictures. Hollywood action flicks aside, it isn’t designed to be fired from the hip. Sure you can do so, but the correct techniques is to bring it up to eye level and use it just like a standard shotgun except it isn’t shouldered.

When so employed, the Shockwave is capable of surprising precision at the close ranges it is intended for. At the range we had no difficulty in keeping all of the shots center mass at the 50-feet distance we were shooting. The bead front sight proved more than capable. Shockwave features a convenient clean-out tube magazine cap, front bead sight, and strapped forend to keep shooter’s lead hand clear of the muzzle and keep it in place during recoil.

Recoil management is different with the Shockwave than it is with a standard shouldered shotgun. You should ride the recoil and not fight it. As mentioned, the Raptor Grip and forend strap help greatly. With reduced recoil loads, there was no difficulty in rapidly emptying the Shockwave into the target. Recoil was noticeably lighter than with the commonly encountered pistol grip.

The Shockwave is designed for close range applications. Coolness factor aside (it definitely is very cool), it’s a niche weapon. It’s not a general purpose shotgun. Within it’s intended parameters, however, it’s an outstanding weapon.

The Shockwave is a great gun for anyone who needs a compact gun with the punch of the 12-gauge round. It’s an ideal firearm for home defense with the proper rounds and a great car gun where allowed. There are also a variety of professional applications in which a short-barreled 12-gauge such as the Shockwave really shines.

If you’ve wanted a short-barreled shotgun without the NFA hassle, the Mossberg 590 Shockwave won’t let you down. It’s a great gun worthy of the Mossberg name. It has a MSRP of $455.00 and comes with a ten-year limited warranty covering defects in material or manufacture.