Why anyone makes the decisions they make is an interesting topic. What are the Whys behind the firearm someone chooses, taking their first class, venturing across the country to train once, and then doing it again?

One of the advantages of teaching at Gunsite is having access to a student base that comes from all over. I recently helped teach an Intermediate Pistol class, Gunsite #350. There were four women in the class, and they agreed to talk to me about this article. Please share this information – you don’t have to be a steely-eyed commando or a barrel-chested freedom fighter to take a class, especially not at Gunsite or most other facilities. Like any other field of study, solid initial training is a good thing. Recurrent training is a must – lest your skills atrophy. When there’s competition, everyone competes against each other. Megan is shooting against a classmate.

Megan, mom & wife, business owner
She started training once she realized she wanted to adopt a more protective mindset for “my family!” Not enough people were doing that. She absolutely did not want to be a victim.
She chose Gunsite because a friend had been there. After returning home from school, they told her it not only enhanced their mindset but that the class had enhanced their abilities too.
Returning for her #350 pistol class, she liked how she was able to build her skills once immersed in the material by being “here” for several days. A sense of humor is a good thing in classes. Stuff can break, but she didn’t let it wreck her experience.

Megan prefers the Sig P320 platform, going with the metal frame Scorpion, because of both performance and feel. Working the roof simulator on a Urban Scrambler run – and getting her hits!

Ashley, wedding photographer, part-time firearms instructor, and retail sales
After being robbed at gunpoint in the United States and experiencing several other “spicey” situations here and abroad, she sought training. A concealed carry permit class opened her eyes to training and the importance of learning when and how to use her defensive tools.
She came to Gunsite based on a co-worker’s recommendation. When asked, Ashley told me she returns because of each instructor’s real-world experience and actual application versus those with just’ book learning.’ 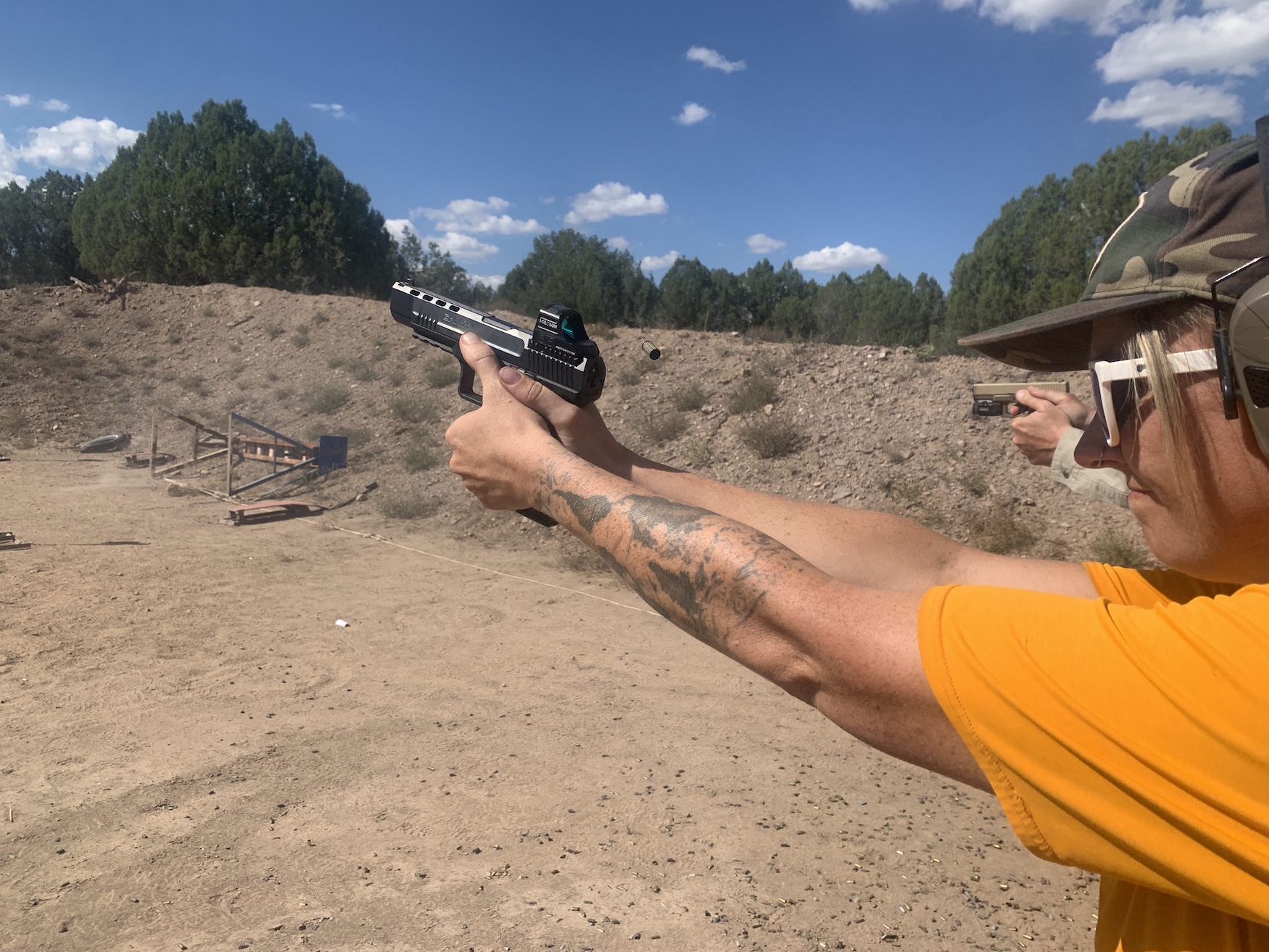 Her Canik TP-9 SFX pistol with a Holosun optic.

Her handgun is a Canik TP9-SFX. She’d gone to buy a Glock 34 when she saw the Canik on the rental board at the range. The quality of the trigger was the best she felt of the guns that had come through the store, and its “crisp re-set” sealed the deal. She went with a Holosun optic based on retail cost and co-worker recommendations. Smith & Wesson M&P CORE 9mm pistol after a shot. Note the spent case in the air.

Christine, trauma surgeon from the Midwest
She described herself now as a competent shooter, not a gun enthusiast. After the 2020 events came to her front yard, she had to consider whether she could use deadly force to defend herself and her loved ones. After making the decision, she began to work with a .22 handgun.
She went to Gunsite because, as a long-time educator, she wanted professional, efficiently & well-presented training because she didn’t want to be “that person who has been shooting thirty years but only learned to shoot 2-3 years ago.”
With her medical background, she wanted a safe training environment because she did not want to worry about being injured or having to treat someone who was hurt.
Her husband started her on an M&P .22 because that’s what was available, and they could buy the ammunition for it. Once they were both comfortable with her abilities, they headed to Gunsite for a #250 Pistol class. A 9mm M&P was available as a rental for the class. Afterward, she found a 9mm M&P CORE pistol at a local gun store and bought it.
She practiced the material for 18 months after the class before returning to take the #350 Intermediate Defensive Pistol course. She chose the M&P pistol because of its availability. Not only for a .22 trainer but the full-size defensive handgun as well.

One equipment issue for Christine was that her holster was designed for an M&P with a smaller Streamlight pistol light, like the TLR7. Because she was not using a light on her pistol, she had issues with how it fit the holster. The school’s Pro Shop was able to help her out with that. Utilizing the van on the Urban Scrambler for cover while pieing around it to engage a steel target.

Lissa is a wife, mom, and part-time firearms instructor.
She started training because she wanted to be more involved with running a “The Well-Armed Women/Armed Women of America” chapter. She was concerned about education on pending gun laws. She keeps training to give back to her community. As for Gunsite, she keeps returning because the classes are realistic, relevant, and applicable to her life, not “tacticool.” Putting in repetitions during the school drills and hardwiring in the optics presentation.

Lissa has put, by her estimate, about fifteen thousand rounds through her Sig M18 over the last two years. She also uses it when teaching. The pistol’s thumb safety was a driving factor for her choosing this handgun. A Wilson Combat modified P320 frame was her introduction to these pistols. The end of class shoot-off. You have to drop three different pieces of steel, do a speed reload, and then drop a split popper.

Four different students with some similar reasons for starting to train. Interesting overlaps and divergences in the Whys behind their equipment as well. Regardless, get your loved ones to good training.

If you are in the upper midwest and you want to support a gun store (and range) that takes training and your rights seriously, consider visiting Fletcher Arms  (https://fletcherarms.com).