One More Safety Net: “The Gadget”

There are few more humiliating things which can happen to a police officer than to shoot himself while holstering his duty pistol. For decades, duty holsters and quality concealment holsters have been cut to cover the triggerguard. This was because in the old days, many cops drew their revolvers with the finger already on the exposed trigger. If something hung up, the gun and the hand and finger kept going and there would be a “bang.” What goes up must come down and what comes from the holster must generally be returned to it. If something interdicts the trigger on the way in, the trigger stops but the gun keeps going, and we have another “bang.”

There have been cases where the culprit was the adjustment cord of a jacket or a plainclothesman’s hoodie getting caught in the triggerguard. In one case, a well-worn concealment holster had softened enough a fold of leather got inside the trigger guard deep enough to press the trigger safety on the trigger of a Glock 19. As the owner pushed the pistol into the holster harder, it fired.

Most often, however, the culprit is the user’s own trigger finger. It’s easy for all of us to flash a superior smile and say, “That will never happen to me, because I always keep my booger-hooker off the bang switch.” For that strategy to be successful, we must assume we are perfect human beings incapable of making a mistake, and the same is true for every officer we train. Ask your own mother if she thinks you’re perfect — and then reconsider your strategy. If you’re an instructor, ask yourself if every officer you teach is perfect and incapable of mistakes, too. 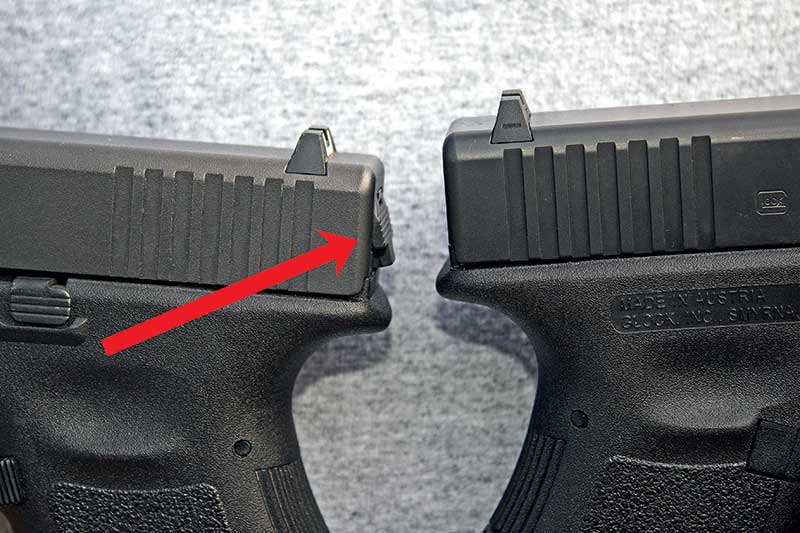 Two otherwise-stock G19’s, Gadget is mounted on the left. When firing, it is seen to rise and fall, which can help instructors diagnose jerky trigger pulls.

Back in the 1970’s, I figured out it made sense to holster with thumb-on-hammer. If something interdicted the trigger the thumb could feel the hammer rising and stop in time. On a cocked pistol, the thumb could catch the hammer before it fell. The thumb at the back of the slide also pulled the web of the hand away from a grip safety, activating it. I published this recommendation in 1983 in my book StressFire. I doubt I was the first one to think of it.

This worked great with hammer-fired guns, but when striker-fired pistols became the new paradigm, all the thumb-on-the-back did was assure the slide stayed in battery. Most striker-fired pistols don’t have thumb or grip safeties (except the XD series), and lose one safety net accordingly. Todd Louis Green and Tom Jones changed that.

The Striker Control Device or SCD, which has become known among the cognoscenti as “the Gadget,” was the brainchild of two men who appreciated Appendix Inside the Waistband (AIWB) concealed carry, but were acutely aware of accidents leaving men dead or castrated. Todd preached thumb-on-hammer and was partial to DA autos in part for that reason. He shared with Jones his concept of making striker-fired pistols safer for holstering there. The year was 2010.

Six years later, at the end of 2016, Todd had lost a valiant 10-year battle with cancer and many other things had gotten in the way, but the now-patented Gadget started shipping to eager customers. Tom had taken over Todd’s popular forum (www.pistol-forum.com), and heavy hitters there had beta-tested prototypes to the tune of half a million rounds fired. Craig “Southnarc” Douglas had exhaustively tested prototypes in his famous courses on winning contact-distance struggles for guns, using “blue Glocks” that couldn’t take live ammo. It may have been the most thoroughly tested product in the history of firearms cottage industries to ever hit the market. The inward-facing surface of the Striker Control Device, AKA “Gadget.”

Tom Jones explains how it works: “The gadget (via thumb pressure) prevents rearward movement of the striker/firing pin. By preventing the striker from moving rearward, the firing pin safety and the drop safety remain engaged and the trigger bar is prevented from contacting the connector. It does not ‘lock’ or otherwise interfere with the normal action of the pistol unless physical force is being purposely applied by the user.”

You use the Gadget exactly as you use thumb-on-hammer. If you feel movement or resistance simply stop, and the gun won’t fire. The original design focused on the most popular striker-fired pistols, the Glock, and fits all standard-size and large-frame models. Next up will be variations to fit the micro-Glocks, the G42 .380 and G43 9mm. Adaptation to other striker-fired designs is somewhere down the road.

Do Glocks and other such pistols need the Gadget? Millions of safe holsterings over the decades say no. It’s sort of like seat belts and air bags — it’s only needed when something goes wrong. But if something does go wrong, it’s too late to get the safety device in place if it isn’t already there. If over four decades of work in the officer survival field have taught me anything, it’s that the engineer’s mindset applies. The more safety nets in place, the better. Price is $79.