Success In Combat: Equipment Or Training? I entered the military at the end of the Reagan Era, and have spent the majority of my 26-year career performing duties in the Middle East, including multiple deployments as part of Operations Southern Watch, Iraqi Freedom and Enduring Freedom. I have trained with, taught and fought alongside our Arab allies in this part of the world for decades, and as a result I have come to understand some things about their unique cultures.

An interesting facet of these cultures is their attitude toward competency and skill in the profession of arms. The military forces and leaders in these countries respect the capabilities of our American military forces greatly, and aspire to reach our level of professionalism, skill and effectiveness, but the strange thing is they often don’t understand the roots of our capabilities. Despite all the years we have been working with each other, they don’t truly comprehend what makes the American military the successful fighting force it is.

In many of these cultures, there’s a disproportionate emphasis on technology as the source of military power and competency. It’s believed Americans are superior fighters simply because they have superior weapons. It’s common in these cultures to discount the effects of motivation, leadership, discipline, education, training, organization, initiative and mindset on a fighting force, and instead focus on equipment as the wellspring of effective combat power. As a result, there’s a predominant belief that combat competency can be purchased, and if the proper equipment is procured, the buyer will automatically inherit the skills and capabilities possessed by other users of the same weapons. Being focused, trained, having the wherewithal to take the fight to the bad guy and never giving up are the differences between walking away from this traffic stop — or not. Your hardware usually has little effect on the outcome. When teaching in the Middle East, Mike’s Arab students thought their Glocks were second rate when compared to the American’s Beretta autos. Mike had to get them to understand it was the fighter — not the gun — that made the difference. Photo: H. Monty Calhoun

We see this with everything from helicopters to handguns, and it has created some amusing and interesting situations for American forces, particularly those engaged in training our allies. For example, when our allies were armed with Glock pistols, many of them complained they must be substandard weapons “Because the American forces did not carry them,” and argued for Beretta pistols instead. Similarly, many of them looked down upon the AK-47 rifles they were issued and clamored for M-4 pattern rifles like those carried by their American trainers and mentors.

In truth, the weapons issued to these allied soldiers were fully equivalent to the weapons used by the American forces, and were eminently suitable for the combat environment in that part of the world. What these soldiers needed to become “more like the Americans” and perform better in combat was not different equipment, but better training, education, motivation and leadership. All things you can only “purchase” through hard work and effort, not with oil revenues.

On the other side of the globe, we seem to be struggling with those same issues in some corners of domestic law enforcement. Instead of maintaining a sharp focus on the difficult tasks of training, tactics and mental preparation, we too have occasionally fallen prey to the siren song that technology is our salvation and can be relied upon to quickly and easily fix all of our problems.

We saw this in the wake of the 1986 FBI “Miami Shooting,” where discussions of calibers and ammunition design took center stage and preoccupied many in the profession for years, when there were equally (and probably more) important lessons from that battle about tactics, training and mindset avoiding scrutiny. The influence of that FBI shooting was felt nationwide when it came to equipment issues in law enforcement agencies — but much less so from a training and tactics perspective, representing a lost opportunity for the profession.

While it may have been the most notorious example of this phenomenon, the FBI shooting was certainly not the last. We’ve continued to see examples where individual officers or agencies have, in the wake of a significant event, appeared to focus inordinately on equipment issues instead of taking a more balanced approach. Is chasing the perfect duty caliber and bullet a waste of time, better spent on training and officer survival skills? After the North Hollywood bank shootout, agencies everywhere started to arm their officers with AR-style rifles, and much effort and money was expended figuring out what was best to purchase. But have we followed up with ongoing intelligent training on how to deploy this technology? Would an agency’s lack of ability to train in low light, when most shootings take place, have an impact on the success of their officers during gunfights? Would their hardware matter at all? Would having a good gun, but armed with little training, make sense?

In fact, we may be seeing it again, now. A major metropolitan police department recently announced they were investigating the efficacy of their handgun service ammunition after a fight in which an opponent was able to continue firing at police officers (hitting one of them) — after he had been shot multiple times by the officers. Apparently, there are some officers or elements within the department who feel the ammunition must have failed to perform properly in order for this to happen.

It should be noted the department does not necessarily concur with this belief, but has agreed to investigate it for merit. It should also be noted this ammunition has a good reputation with other agencies who use it in their duty guns.

News reports describing the shooting in question note the offender was shot five times, but only one round struck the chest (apparently after penetrating the arm, first). The remaining hits were to extremities, including the hip, wrist, leg and finger.

Based on this information, it seems difficult to conclude the failure to stop this individual was the fault of the ammunition itself. All handgun ammunition is relatively impotent, and it’s not a reasonable expectation to assume a single torso hit (from any caliber or brand of ammunition) is going to instantly stop an agitated, emotional, adrenalized suspect who is actively fighting the police. It works that way in the movies, but not in real life.

Perhaps the real issue here might be one of mindset and mental preparation, in particular a belief in false expectations. Perhaps the people who are concerned an ammunition failure occurred in this incident have an unrealistic view of what their pistol ammunition, or any pistol ammunition, is actually capable of doing. History is replete with examples of humans who have endured tremendous bodily punishment, yet have continued to struggle and fight with vigor.

The FBI shooting provides numerous examples of this behavior, and our returning military veterans could probably fill books with more. Just because you have shot an individual does not mean he will stop fighting — even if you hit him in the K5 Zone, or with the latest magic bullet. If he’s not convinced he has been stopped, then it doesn’t matter what you think should have happened. These circa-1940s’ cops only had the basics — 6-shot revolvers, straight nightstick and if they were lucky, 12 rounds of reloads — yet they seemed to handle things. Are we too technology-crazy today? This very moment is when the investment in training, knowledge, skill, drive and the will to succeed in spite of the odds comes into play. The gun and ammo in your holster matters little — as long as it simply runs as promised by the manufacturer. A simple word that can mean the difference between winning a fight or losing badly.

Then again, there’s the question of training. Recent reports regarding the department in question indicate they have had long-term difficulties with gaining access to appropriate training facilities. Their firearms training facility borders a neighborhood with residents sensitive to noise. Demands have imposed severe restrictions on operating hours for this outdoor range.

The department is only able to access the facility 4 days a week, and only between the hours of 0900–1700, not only reducing the frequency which they can train the officers, but also diminishing the quality of the training. Because of the restrictions, range staff are unable to conduct training in the reduced lighting conditions their officers are most likely to encounter during a shooting. Could these training deficiencies and limitations have played a greater role in the outcome of the event in question than the choice of ammunition?

Perhaps the key issue here is not one of equipment, but instead of training and mindset. It may be attractive to focus on the low-hanging fruit that is easily grasped, but it’s likely the time and effort spent researching and evaluating ammunition choice would be better spent finding an alternative training location. A location allowing the department to conduct training of the quality and frequency their officers require to do their job safely would enhance their survivability rate tenfold over any ammunition change. Additionally, it seems reasonable the people promoting this ammunition inquiry should revisit their mindset and tactics. Do they have a realistic expectation about ammunition effectiveness and a knowledge and mastery of the appropriate tactics to deal with that reality? If not, it’s unwise to make demands about something you know little about. 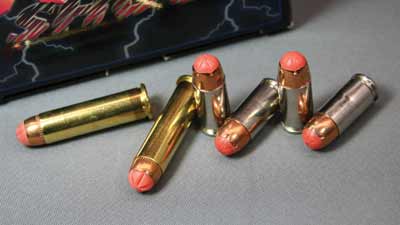 Is there truly a magic bullet? And if not, why do we continue to believe there is such a thing? When this is happening to you, is the caliber of your duty handgun or the ammo you carry the most important thing, or your ability to think and fight? If there is a perceived failure in a situation in the field regarding a gun or ammo, is the answer more accessories — or more training?

Many years ago, in April of 1970, four highway patrolmen were shot and killed one night by two felons in Newhall, Calif., during a vehicle stop. In the wake of that horrific shooting, there were many changes made to the equipment, firearms and ammunition carried by the patrolmen on the agency. More importantly, there were many more changes made to their training and tactics. It was the focus on these latter issues which was the true legacy of the Newhall incident, and provided the most significant advances in officer safety for that department and the profession as a whole.

It’s time for us to remember and revisit those lessons, lest we get distracted by the false promise of technology fixes to problems arising in combat. How many times do we have to reinvent the wheel on this one? Do we want to keep repeating the mistakes of our foreign military friends?

Lieutenant Colonel Mike Wood is the author of Newhall Shooting: A Tactical Analysis, an electronic book published by F+W Media, Inc. Please visit the official website for this book at www.newhallshooting.com for more information.