The scene after a terrorist knife attack in Paris, France on May 12, 2018

We all hear statistics regarding active shooter incidents. I would be surprised if the phrase ‘active shooter’ is not already in the urban dictionary. Well, that’s certainly not the complete picture. How many single- or multi-casualty incidents do not involve firearms? What about vehicles used as battering rams? Perhaps our terminology would be more accurately “Active Assailant.”

Certainly, the ability of virtually anyone to acquire an edged weapon legally or casually is without restriction, save for those incarcerated – although that does not deter creative and motivated minds from making a shiv out of basically anything.

We carry edged weapons on and off duty (what is your agency’s edged weapons policy?), at home, and everywhere else. We train on handgun retention, but what about retaining that large handled push knife on your duty belt?

We have all heard the “21-Foot Rule.” It is more of an illustration of action vs. reaction and how quickly things can go wrong. Unfortunately, this was distorted into an absolute.

Nearly every agency has a box of knives confiscated during subject contacts. Having no evidentiary value, they end up in the ‘knife box.’ Some of those things are testaments to what you can create with duct tape and something sharp.

Several videos have recently shown officers utilizing Tasers or other less lethal force against subjects with edged weapons. Many of those suspects were much closer than 21 feet. The ceramic knives used in the Paris attacks

I have several concerns, not the least of which is a growing trend for officers hesitating to appropriately use deadly force, fearing their agency will not fully back them, or just not wanting to be the next media target. The meat cleaver used in the terrorist attack on the Carlie Hebdo magazine office.

Terrorists and the Use of Edged Weapons

Propaganda from several terrorist organizations has encouraged the use of readily available edged weapons, as they can often have fewer visible indicators, along with a reduced time of detection and disruption.

The October 2020 publication of the pro-ISIS ‘The Voice of Hind’ by the Jund al-Khilafah urges using edged weapons against accused blasphemers. A pro-ISIS view on using edged weapons against non-believers.

This document highlighted the October 2020 knife attack in France on a teacher. The teacher was targeted after discussing freedom of expression and the Charlie Hebdo Muhammad cartoons.

A few days later, another individual killed three people and injured several others with a knife inside a Nice, France church. At the French consulate in Jeddah, Saudi Arabia, both a guard and another individual were also stabbed.

Responding officers may observe indications that an edged weapon attack is a terrorism-related incident. An attacker’s actions or statements during an incident may provide insight into potential motivations and possible follow-on tactics, techniques, and procedures used by the attackers.

Consider that an incident may be part of a larger complex and coordinated attack, which may entail others targeting first responders.

A suspect motivated by violent ideology, especially martyrdom, may not comply with commands to stop the attack and disarm.

You may see the following indicators:

Pre-arrival – Information from 911 operators, such as reported behaviors or statements indicating allegiance to terrorist groups or a need for revenge.

During Response – In addition to sizing up the scene and performing life-saving actions, try looking for visible or audible signs indicating violent extremist ideology, such as stickers, graffiti, and flags.

Responders should be highly aware of their surroundings, which warn of an attempt to lure first responders into an ambush or follow-on attack.

If someone approaches you, watch their hands for palmed items or suspicious movements, such as reaching for pockets, the waistband, or anywhere a weapon could be concealed.

Attackers have modified innocuous items, such as lawnmower blades or wrenches, to conceal their appearance as edged weapons.

Use of appropriate safety gear is recommended, such as ballistic vests. They may not be designed to protect against edged weapons but might provide extra protection.

Training – Responders are encouraged to continue training for an edged weapon attack. Studies have established parity of force between holstered firearms and impact or edged weapons of 21 feet, based on reaction time and marksmanship changes challenges, with firearms gaining an advantage at increased distances. This Chief of Police opened his front door and was stabbed in the face by a suspect.

Berkeley County, South Carolina, September 7, 2020: A man accused of stabbing the Bonneau police chief in the face with an ice pick is in custody after a standoff with Berkeley County deputies. After stabbing Chief Franco Fuda under his left eye, investigators said Bowman ran to his mobile home and barricaded. Forrest Bowman was arrested shortly after 12:30 p.m. The SWAT team brought Bowman, who was naked and screaming, out of his trailer. According to Fuda, Bowman told him that he was “going to die today.” 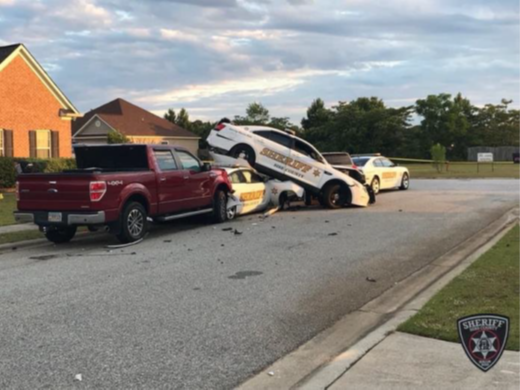 A domestic violence suspect crashed his red truck into one patrol car – a deputy who was in it at the time survived.

Also, remember it’s not only firearms that can be used in ambushes – always be mindful of scene security. The red truck was the suspect in a domestic violence call who had left earlier but returned to the scene while Deputies were interviewing the victim. A deputy seated in one of the patrol vehicles was injured but recovered.