PERFORMANCE UNDER FIRE | Who Wins, Who Dies, and Why Human factors are a significant thing, especially in those career fields or endeavors where failure can have a catastrophic consequence to an individual or a group.

The aviation community has successfully worked these issues and the related science into their evaluation and training processes. Law enforcement and the self-defense community were slow to catch on. Part of that seems to be a belief about applying science to some events but not all.

An example, people will say there was enough time or too little during an event. The analogy I’ll respond with is a football kick-off. It “only” lasts 10-15 seconds, involves 22 players, and yet can cover up to a hundred yards. How much happens during that time? How much can you see watching it? Maybe this is a little more complicated than some of us thought. An awful lot of this is going on subconsciously.

Modern Man’s capabilities and limitations have evolved over 200,000 years; our pre-human ancestors were here even longer. Recent inventions like firearms (900 years old) and sights (500 years old) haven’t even begun to make a dent in our DNA.

The use of human factors in understanding violent encounters has a relatively short history. Dr. Bill Lewinski and the Force Science Research Center are some of the best-known names in the field. They were among the first to take human factors and apply it to deadly force situations. Their flagship course is the 40-hour Force Science analyst certification. Additionally, they offer a shorter overview course for administrators, de-escalation training, and other advanced or specialist certifications.

Researchers and scientists from the aviation world and other fields have also brought the data to our community.

With either program, the primary classes were three to five days long. There’s tuition, travel, lodging, and meals to consider. Also, for many years, you could not even take these classes if you were not military or law enforcement.

What was a decent, normal human being interested in being able to defend themselves to do if they wanted the knowledge?

Enter my friend John Hearne of Two Pillars Training. Being a father and full-time federal law enforcement officer were not enough for him. He has master’s degree in criminal justice with a concentration in research methods.

Over time, Hearne has distilled a wide range of material into a daylong presentation that anyone willing to listen can understand. You may not be able to take off a week and travel several hundred miles to take a Force Science class, but you can give up a day, right?

The class covers several different areas, such as:

How the brain works under stress;
What is your subconscious doing?
What’s the benefit of training?
Fight/Flight/Freeze, your system usage, and avoiding downward spirals;
Ways you can validate your own preparedness;
FBI research on officer-involved shootings and hit rates, beyond the oft-cited 18-20%; 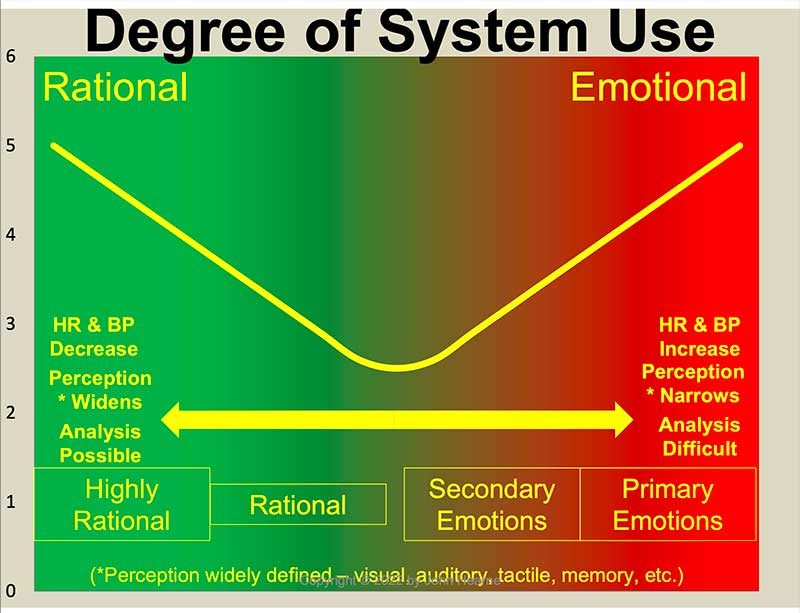 What parts of your system are you using and how? Have you stayed in your rational mind? Or did the emotional, reptilian side take over? If you’ve gone emotional, the downward spiral can happen quickly.

John’s presentations will also slay a sacred cow or two by addressing:
Heart rates and their perceived impact on performance;
Startle response and whether or not it applies to every one;
Does Man have an innate hesitation to killing other humans?
How does Hick’s Law really work?
Do fine and gross motor skills impact us?
Is there a perfect way to prepare? Psst, there are benefits to competition and hunting. Like any good researcher, John gives complete credit to those whose work he has used. He provides the pointers to the material so you can confirm it too.

Hearne presents everything in terms of how it can help get you, the student, to perform at a level known as automaticity. This is unconscious competence, where things “just happen” while you are solving the problem at hand.

One final example of John’s ability to synthesize and convey material: With feedback from others across the self-defense and training community, he developed a graphic about automaticity.

What can your performance, either in competition or with these drills, indicate about your skill level?

This chart looks at several qualification courses, shooting drills, and competition rankings to try and determine ones’ level of performance.

While working on this, I reached out to others who have attended several of John’s presentations for their thoughts.

Fellow Gunsite instructor Jay Tuttle offered:
John Hearne’s Performance Under Fire is a deep and engaging dive into why our response to extreme stress may, mainly when life or death is on the line, range from mindless rage or total freeze to cool, deliberate action. After discussing the physiological and psychological factors involved, John makes several recommendations for practical steps we can take to improve our chances for a positive outcome. Along the way, he also dispels a few myths (or, more generously, inaccuracies) that have been repeated by other instructors, myself included, who haven’t taken the time to actually research the facts. I can’t recommend this class highly enough. If this was a starred review, it would be 5/5.

Cecil Burch, of Immediate Action Combatives and the ShivWorks collective, told me:
“John has done a really good job of looking at the research, then taking what a study says and making it apply to us as students, shooters, and fighters – to help us better understand what we are physiologically capable of under stress and how to train to do it.”
The doctor wrote: “John’s Performance Under Fire class … is an extremely comprehensive examination of what factors influence a person’s response in a conflict and what one can do to prepare to win. While the background is fascinating, of particular interest to me was his list entitled, “Do As Many As You Can”. I anticipate buying his book when he finally publishes it, which I hope will be soon.”

You can find Hearne on most social media platforms and several podcasts. His website, jhearne.com is a work in progress.

His material is well worth your time.