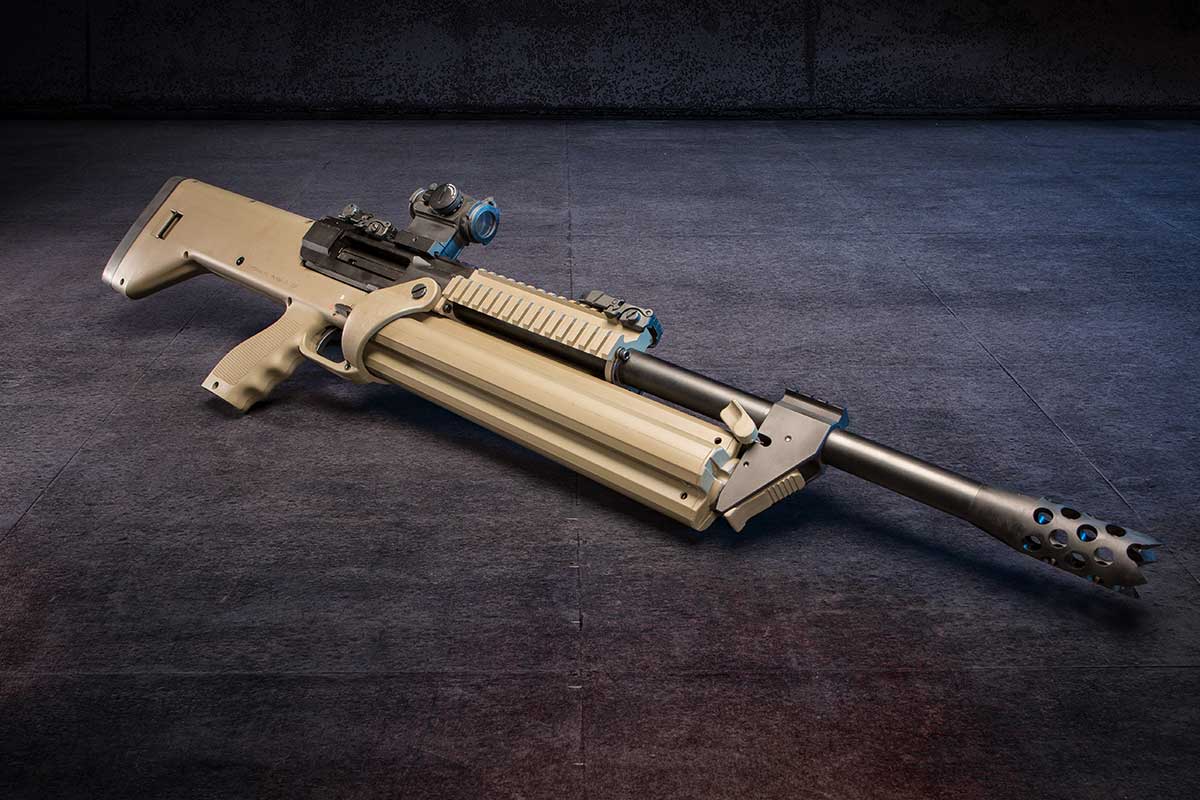 Most fighting shotguns are descendants of hunting shotguns modified for use in a defensive/offensive role. Many, such as the Remington 870 and Mossberg 500/590 series, have served with distinction.

But due to their genealogy, they share the common complaint of minimal ammunition capacity. Even “tactical” shotguns are somewhat limited. For example, the Remington Express Tactical has a capacity of 7+1 and the Mossberg 590 comes in at 8+1.

What if you could have a shotgun built from the ground up as a fighting shotgun, shorter than most while weighing within a few ounces, and with a total capacity of 17 shells? The SRM Arms 1216 makes this a reality.

The SRM Arms 1216 (hereafter referred to simply as the 1216) is a roller-delayed, straight blowback semiautomatic shotgun. The lower receiver is polymer while the upper receiver, bolt group, and barrel are made of steel. While not necessary for routine maintenance, the upper receiver can be detached and is the serial numbered part.

Barrel length is 18½ inches. The muzzle is threaded and comes with a screw-on thread protector. The optional standoff device, as shown in the photos, adds 2½ inches to the length of the barrel.

On top of the receiver is a six-inch Picatinny rail. The handguard has three six-inch rails located at 9, 12 and 3 o’clock. An additional 1½-inch rail section is located forward on the barrel 4½ inches from the muzzle.

Right side of SRM 1216 with optional standoff device. Rail covers are a good idea, especially on the plastic rails, to protect the slots.

Each tube has its own spring-loaded shell retainer.

A quality rubber recoil pad caps the buttstock. Also located on either side of the stock are recessed sling attachment points. A sling attachment is located at the front of the side rails and is reversible for right- or left-handed use. Both sides of the pistol grip are textured for a sure grasp.

The sling attachment points are narrow by contemporary standards, and many of the wider “tactical” slings will be too wide to use. Turning to my favorite sling manufacturer, Blue Force Gear, I utilized their one-inch Vickers Combat Application Sling for the evaluation.

The 1216 doesn’t come with sights, though any backup iron sights that fit on a Picatinny rail can be used. For the evaluation, I used an Aimpoint Micro T-2 red dot sight. Due to the straight-line design, the Aimpoint indexed perfectly with the high spacer used on carbines.

The test gun came set up for a right-handed shooter, but the bolt release, charging handle, safety selector, and ejection port can be converted for use by a left-hand shooter.

The safety lever is located just above the trigger guard and is easily manipulated by pushing it upward with the trigger finger.

What sets the 1216 apart from other fighting shotguns is the revolving magazine. The magazine is approximately two inches in diameter and 13 inches long. It has four integral magazine tubes that hold four shells in each tube. Each tube has its own spring-loaded shell retainer. To unload a tube, pushing inward on the shell retainer allows the shells to be removed.

At the front of the magazine is a round protuberance that matches up with the magazine hanger on the barrel and four slots that index each tube.

A manual index lever is located at either side on top of the magazine hanger. To rotate the magazine to the next tube, push up on this lever and either push or pull the magazine with your fingers. The magazine can be rotated either clockwise or counterclockwise.

During this evaluation, several shooters fired the 1216, and reactions were mixed on the easiest way to rotate the magazine. Personally I found it easier to push up on the magazine with my fingers turning it counterclockwise as viewed from the rear. SRM 1216 hinged open for cleaning. Disassembly is similar to that of a modern sporting rifle.

Field stripping the 1216 is similar to the takedown of a modern sporting rifle. Place the shotgun on safe and remove the magazine. Pull the charging handle and visually and physically verify the chamber is empty, then push the bolt stop and allow the bolt to go forward.

Locate the latch pin at the top rear of the receiver and push it out until it stops. Pivot the stock away from the upper receiver. Grasp the charging handle and pull the bolt carrier to the rear. No further disassembly is necessary or recommended.

The 1216 operates like any other semi-auto firearm. Insert the magazine, work the charging handle, and you’re ready to fire. When the last round in a tube is fired, the bolt stays back. When the mag is rotated to a loaded tube, the bolt goes forward, automatically loading the first shell in that tube.

Some may point out that a round can be dropped into the chamber and the bolt released on other semi-autos for a quick shot. Correct, but that is a single round. With the 1216, when the round is chambered, it is backed up by three more in the mag tube.

There was a time when I would pattern numerous brands of buckshot through a shotgun to find the buckshot load a particular shotgun liked. To save time and ammo, I now go with two proven performers that seem to work great in all shotguns: Federal 00 buckshot with FLITECONTROL® wad and Hornady Critical Defense 00 buckshot with Versatite™ wad.

With these two loads, instead of starting at five yards and working my way back, I normally start at 20 yards—they really do pattern that tightly.

For my purposes, I consider that the shotgun/load has reached its maximum potential when all nine 00 buckshot pellets won’t stay inside the “C” zone of an IPSC target—roughly 18 inches high by nine inches wide. 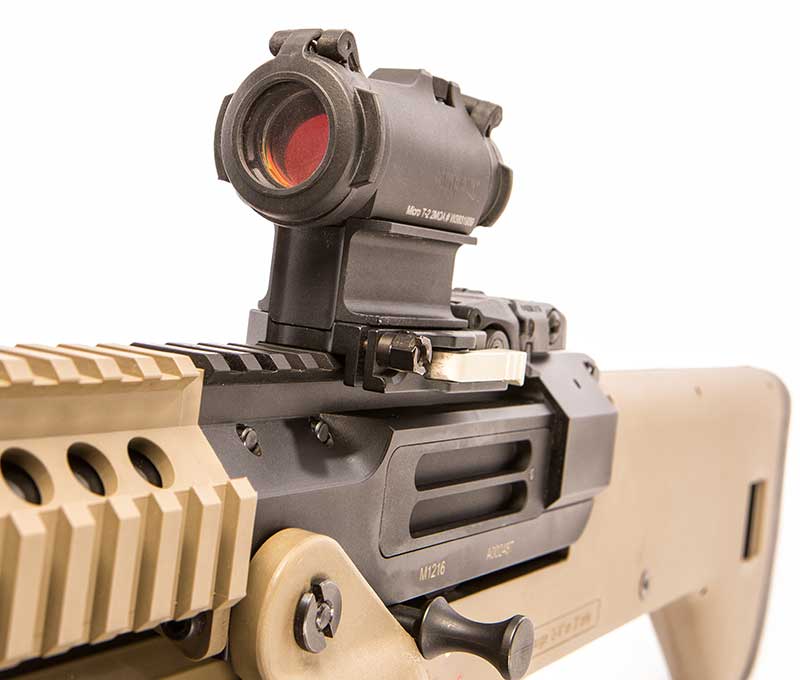 Though not ambidextrous, safety selector can be set up for either right- or left-handed shooter.

At 25 yards, the Hornady load kept all pellets inside the “A” zone (approximately 11 inches high by six inches wide) and kept them all within the “C” zone out to 35 yards.

All pellets from the Federal were inside the “A” zone at 25 yards and did not drop a pellet outside of the “C” zone until I reached 40 yards, proving the old myth that buckshot opens up at one inch per yard is just that—a myth.

Switching over to slugs, I once again went with Federal and Hornady. The Federal load was their one-ounce TruBall® Rifled Slug. I was curious how the Hornady Superformance® Shotgun slugs would perform, as they were designed for shotguns with rifled barrels. The Superformance® Shotgun slug is a monolithic solid projectile made from copper alloy (95% copper/5% zinc) and topped with Hornady’s exclusive Flex Tip® for uniform expansion even at the low velocities of longer-range impacts.

I went back to 75 yards with the Federal TruBall slug and achieved five-round groups just over six inches fired from braced kneeling.

Three rounds of Hornady Superformance slugs went into about three inches at the same distance but, as mentioned above, since they are designed for rifled barrels, two of the five rounds keyholed from the smooth bore, opening the group up to 6½ inches.

While neither of the slug loads was as precise as a carbine, I didn’t expect them to be. Both loads maintained minute-of-bad-guy accuracy.

While you are legally and morally to account for every projectile, you can put a lot of lead downrange very quickly with the 1216. After a familiarization session, one shooter fired 17 rounds in 11.5 seconds and placed all 153 00 buck pellets into the “A” zone of an IPSC target at 15 yards.

A spare magazine is not included with the 1216 but is available from SRM Arms for $199.00. I requested and received an extra magazine for this evaluation. There is no dedicated pouch for a spare magazine, so I found the best way to carry it was in a left-side cargo pocket or dump pouch.

With the exception of going into the port with a single round and closing the action, there’s no such thing as a speed reload with a shotgun. After a bit of practice, I could replace the magazine in about six seconds—just a little longer than it takes to reload a pump shotgun from a SideSaddle—but reloading with 16 shells instead of four or five.

The 1216 experienced no stoppages with 200 rounds of mixed buckshot and slugs. Due to fine threads, both thread protector and standoff device required only moderate tightening to stay in place.

At this time, the 1216 is offered in Black, OD Green and Flat Dark Earth.

Also available is a less-lethal version that uses a special orange-colored bolt and will not fire lethal ammunition. Since the upper receiver is the serial numbered part, I strongly suggest any agency considering the 1216 for less-lethal duty to also purchase the orange stock to readily identify it as a less-lethal gun.

SRM Arms provides a one-year limited warranty on all its shotgun models.

But if you want or need a firearm that’s built from the ground up as a fighting shotgun and has more than twice the ammunition capacity as any other shotgun, the SRM Arms 1216 deserves a close look.