During the summer and fall of 2022, a lot of gun writers and end users were getting their hands on the Prodigy. There were a variety of different opinions that came from them. Some were good, and some were not. I won’t say that part of the errornet lost its mind, but that would not be too far off.

In late December, I came up on the list to get a Springfield Prodigy for an article. I have one in hand now – a 4.25″ slide with their Hex pistol-mounted optic. I’ll cover my initial impressions shortly.

I don’t count my time carrying an arms’ room 1911A1 while in the Army. Honestly, aside from barely knowing how to make it go bang, I knew nothing about the pistol and using it. My first 1911A1 from Colt. It went right from the gunstore to the gunsmith for reliability work.

In the summer of 1989, I was hired as a deputy sheriff trainee after a final meeting with the Sheriff. This was at a department with numerous 1911s in holsters of patrol deputies, detectives, and bailiffs. Walking out of that interview, I drove across the highway to Helm’s House of Guns (Mel, not John) and bought my first 1911a1 – a blue steel Series 80 from Colt – for about $550. Back then, we all “knew” those 1911s would need some work before they could be relied on for defensive or duty use.

Why? Those guns came from an era when labor was cheap, but the technology was expensive.

So, the guys in Helm’s walked my pistol next door to Scott, McDougall, & Associates (McDougall later became a pistol smith of some renown). I paid them a then princely sum of $350 for their Basic Combat Auto package – feed ramp and chamber work, an action job, milling the slide and fitting sights, a Beavertail grip safety, and an ambidextrous thumb safety.

All of that was needed to get a factory Colt ready for work. As an end user, you just expected that you would need to have those things done. Feeding issues were quite common. At the time, my organization wanted you to have shot 500 rounds through any personally owned firearm before wanting to carry it on duty.

I carried that Series 80 as my primary work gun from when I started on patrol in the summer of 1990 until I retired it in 2006. By then, the frame, slide, and magazine catch were the only original parts left.

Fast forward to 2010. I was still carrying 1911s on and off duty. Regrettably, my original gunsmith (McDougal) had died of cancer. That drove me to learn more about working on these guns.

That year, I took a Larry Vickers Build a 1911 class. To be kind, the skills needed were over my head. Larry and my bench mate, Vinny, managed to get me through with a workable Series 70 pistol. That week taught me that carrying a 1911 as a duty gun may not have made anywhere near the sense it once did – when I had instant access to a capable gunsmith. During the twenty-plus years I carried 1911s, I used Government, Combat Elite, and Commander models, along with Officers ACP and CCOs, plus a custom .380 Mustang that looked like a full-house race gun after being washed in hot water. And I own a 2019 edition of a Staccato P series pistol. I tell you that because I am realistic about the platform’s design and function and what is needed to make it work reliably.

After clearing California’s waiting period and getting the pistol “out of jail,” I noticed the following:

– They profiled the rear of the ambidextrous thumb safety, something a very popular 2011 does not have;

– The slide stop is deeply recessed into the frame. While not a big issue for most, it wasn’t easy to access as a lefty;

– The frame is textured like skateboard tape, and the front strap is cut high into the trigger guard grip;

– The recoil spring assembly requires a hex key to remove.

The slide stop almost disappears into the frame.

The pistol arrived with two magazines, one 17-round and one 20-round. A view through the Hex pistol-mounted optic.

Next, the Hex optic. Its housing is shaped like a stop sign’s upper half. The battery compartment is under the optic, which requires removing the optic to change the battery. After replacing the battery, you will need to repeat the mounting process before you can re-zeroing. There is an auto-off feature as well. One design feature that stood out was the forward-angled housing that protects the glass and can help with purchase should one-hand manipulations be needed. Springfield choose Agency Arms’ proven AOS mounting system for this project.

I headed to a local range for the initial session. For feeding and function, I fired 161 rounds of 100gr Speer frangible; 115gr ball from Ammo Inc, Federal, Freedom Munitions, and Speer; 147gr Federal HST; and 150gr Federal SynTech action pistol.

I then fired 90 more rounds while preparing for an alternate shooting positions class. Out of those, 5-6 rounds fed but would not go completely into battery. Pushing the slide forward with my thumb seated these rounds. 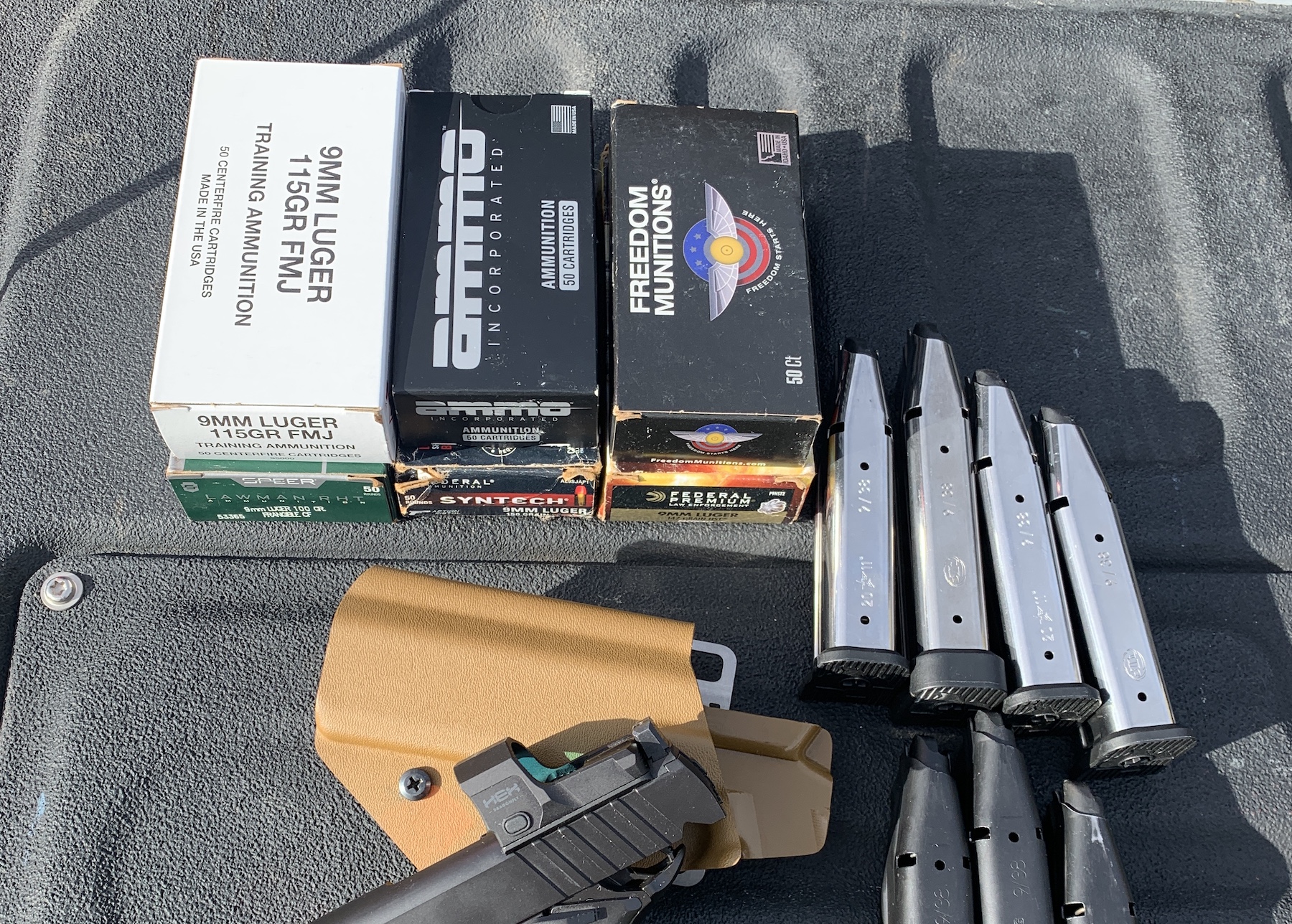 Ammunition from Ammo Inc, Federal, Freedom, and Speer was shot through Springfield and STI magazines this session.

There was one failure to feed when a SynTech round nosed on the feed ramp; this was out of an old, well-used STI magazine.

A well-used magazine was the cause of this feed ramp stoppage.

Subjectively, the Prodigy’s frame fit my hands better than its competitors.

Using a spring-loaded RCBS trigger pull scale, I got the following trigger weights:

Look for part 2 after I get back from SHOT and send some more rounds through it.