Labels are important in setting our expectations for a firearm. In U.S. military parlance, DMR stands for Designated Marksman Rifle. We will confine our discussion of DMR concepts and patterns to the U.S. experience.

The default chambering of the DMR is .308 Winchester/7.62x51mm NATO. The DMR originated to fill the effectiveness gap between the standard infantry rifle and sniper/precision rifle. This middle ground is roughly between 270 to 550 yards. The DMR is closer to the precision rifle versus standard rifle in terms of terminal ballistics, adjustable buttstocks, match trigger, match barrel, accuracy standard, magnified optics and accessories to facilitate long range shot placement.

Compared to the traditional bolt-action sniper rifle the DMR is typically semiautomatic with detachable magazine capacity of 20 rounds or more. The M14 was the initial military DMR due to it already being in the logistic system and thus easy to adapt.

Most would concede that an AR-10 type platform is a better candidate in the DMR role thanks to inherent accuracy potential and other factors.

Frankly, accuracy potential of a quality AR-10-type weapon is often on par with a bolt-action meaning each is only limited by the capability of the cartridge and not by the platform used. The fact that accuracy is not sacrificed makes decision making even simpler when choosing a precision .308 AR. The DMR has come into its own within the military and expanded rapidly into law enforcement use. This is due to a variety of reasons including accuracy, situations more suited to the higher capacity magazines, and the need for better penetration than typical 5.56mm rifles.

Not to be discounted is the ability to have the power of the .308 in a high-capacity AR platform if unsuspectingly engaged in a close melee with a need for multiple rounds sent downrange quickly. In terms of ballistics and terminal effect the potency of the .308 make it a favorite among our troops, law enforcement personnel, and security conscience private citizens.

The case can be made that DMR rifles have expanded beyond their originally envisioned supporting role and become a prime weapon of choice in their own right. The SIG Sauer (SIG) 716 DMR is a case in point of how far DMR rifles have evolved.

The SIG 716 DMR spawned out of the earlier introduced SIG 716 Patrol. The SIG 716 DMR includes several changes from the 716 Patrol as would be expected in a rifle designed more with accuracy in mind.

For example, there is no included muzzle device. Instead, the muzzle has 5/8×24 threads and is supplied with a protective screw-on knurled collar. The idea behind this is to make the gun ready for whatever muzzle device the owner wants to install. The 18-inch 1:10 twist, free floated cold hammer forged match-grade heavy barrel is made of chrome-moly vanadium steel. All of these things are proven recipe ingredients for an accurate barrel.

The SIG 716 DMR has a top Picatinny rail running from the front of the handguard to the rear of the upper receiver. Front and rear flip-up sights are included. The handguard has rails at the three, six and nine o’clock positions along with quick-detach (QD) sling swivel sockets on the left and right sides of the rail. There are also QD sling swivel sockets at the rear of the lower receiver.

The SIG 716 DMR weighs in at 12 pounds before adding optics and ammunition. Overall length is just under 39 inches. Left side of 716 DMR showing ambidextrous magazine release and sockets for
stud-type sling swivels on lower receiver and handguard. Right side of rifle has sockets for stud-type sling swivels for right or left-hand users. An extension running under the full-length top rail allows easy access to the gas valve.

The upper receiver has a forward assist. The charging handle is enlarged to facilitate easier manual cycling, which is stout with the .308 AR rifles.

The rifle features an ambidextrous magazine release and the magazine well is beveled to aid in smooth magazine insertions.

Two Magpul PMAG 20 LR/SR magazines arrive with the SIG 716 DMR. The PMAG 20 is the industry standard for AR-10 type rifles.

Other Magpul support is found on the 716 DMR in the form of MIAD pistol grip. It features three interchangeable backstraps and two different frontstraps that allow the shooter to customize it to suit their hand size and preference for finger grooves. A Magpul PRS buttstock provides adjustable shooter interface with the SIG 716 DMR allowing for length of pull and cheek height to be customized.

SIG Sauer fully understands the importance of an excellent trigger for accuracy results. A Geissele SSA match trigger is installed in the 716 DMR. The Geissele is a two-stage style trigger breaking at six pounds.

The 716 DMR is a short-stroke piston-driven AR platform. This is an important distinction separating it from many other precision AR10-type rifles that are direct impingement.

Understandably, SIG SAUER is not eager to share full details of its proprietary hard work figuring out the details enabling such a high degree of accuracy with the 716 DMR. A factory test target arrived with the SIG 716 DMR showing a .6-inch five round group at 100 Meters. Test targets showing similar or even better accuracy have been reported involving other SIG 716 DMR rifles.

The short-stroke push rod operating system with adjustable gas valve is the heart of the SIG 716 DMR. The SIG 716’s four-position gas setting ensures a user can adjust to changing environmental conditions; not to mention better employing a suppressor. 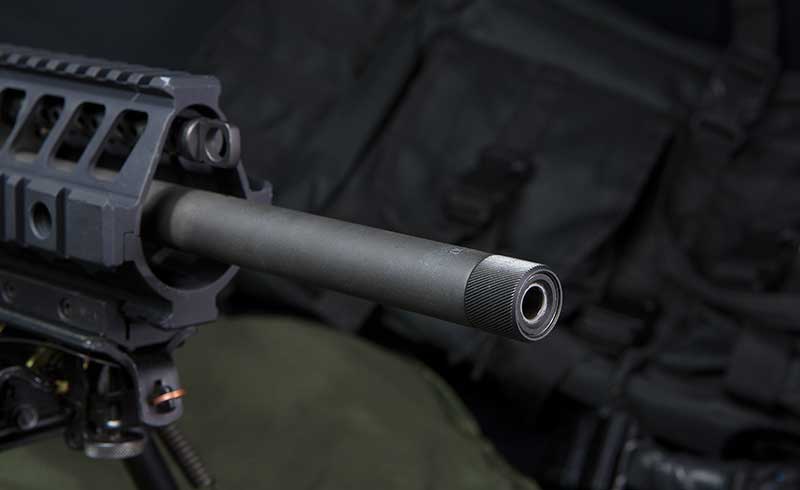 Barrel is threaded to allow the muzzle device or suppressor chosen by the owner,
and comes with a cap to protect the threads. To fully evaluate the SIG 716 DMR a SIG Tango 6 3-18×44 optic was mounted. Tango 6 offers a 3X power setting for quick target acquisition at closer range, and 18X for precision shots at long range.

Settings are #1 normal (gas valve straight vertically), #2 adverse (right of vertical viewing the rifle from the front), #3 suppressor use (left of vertical), #4 gas off (horizontal by turning further to the left). The #4 setting totally cuts off gas from the action and maximizes suppressor efficiency by not allowing the action to cycle.

In an effort to fully evaluate the SIG 716 DMR, the recently introduced SIG Tango 6 3-18×44 optic was mounted. The Tango 6 offers a 3X power setting for quick target acquisition at closer range, and 18X for shots at long range.

The SIG SAUER Tango 6 is loaded with high-end features such as adjustable illuminated MOA reticle, extra-low dispersion glass combined with high transmittance glass for outstanding light transmission and clarity, along with resettable lockable and zero stop turrets. SIG SAUER offers various power ranges and options in the Tango 6 model lineup such as different reticle styles, MRAD or MOA turret adjustments, first or second focal plane, and so on.

While certainly not svelte handling at 14-plus pounds with optic mounted and loaded 20-round magazine, the SIG 716 DMR was more than manageable in terms of handling.

No ammunition tested produced greater than one-inch groups at 100 yards—an impressive feat in its own right. However, Federal Match producing 5/8-inch inch accuracy and the Hornady TAP exceeded that with a couple sub ½-inch groups!

There are custom precision bolt-action rifles that do not have this type of accuracy—let alone a factory produced semi-automatic AR.

After the strong 100-yard accuracy performance, the 300- and 550-yard tests were eagerly anticipated. In conjunction with individual training bays, Echo Valley Training Center (EVTC) features a multi-stepped target berm that are strewn with reactive steel targets and fluid drained automobiles at ranges varying from 150 yards out to 350 yards.

Firing the SIG 716 DMR from the prone position produced consistent hits at 300 yards on TacStrike ¼ scale steel targets. Firing at paper targets produced 2.25-3.5 inch groups at 300 yards depending on the load used.

EVTC’s Range #5 allows for up to 550-yard target engagements. The sub-MOA accuracy exhibited at 100 yards proved invaluable at extended ranges. As long as I did my job reading wind conditions the SIG 716 DMR produced solid strikes on the steel targets. At times, I’m sure I was the weak link in the rifle/ammunition/optic/shooter performance equation. The SIG 716 DMR supported by the Harris bipod that comes as part of the package proved more than capable of engaging small steel poppers located inside the EVTC range vehicles located on the 220 yard berm. Some of the scenarios involved firing through the front windshield.

An interesting side note is that Black Hills Ammunition 180-grain Nosler Accubond load is a top consideration for this type of engagement. The Accubond round is a more reliable performer for barrier penetration compared to Match bullet types thanks to its bonded construction.
The SIG 716 DMR proved reliable throughout this evaluation with over 450 assorted rounds sent downrange. Its 18-inch barrel combined with 168-grain bullets produced velocity in the mid 2,500 feet-per-second (fps) range when tested over a RCBS chronograph.

The 716’s DMR’s 18-inch barrel sacrifices approximately 100-120 fps compared to 24-inch tubes. The handiness gained from the shorter barrel outweighs the velocity lost in my opinion.

With the 716 DMR, SIG SAUER has created a precision rifle that is imminently adaptable to modern tactical situations. It is a simple matter to install an ATN PS 22 night vision device on the forend rail in front of the SIG Tango 6 optic. The entire PS 22 concept is based on wanting to give the user the convenience of using their day optic at night without have to switch out aiming devices or having to dedicate a weapon solely for in darkness.

Use of EBR or Corbon subsonic ammunition, as appropriate to the situation, would only heighten its capability of nearly silent engagements within 100 yards.

The SIG SAUER 716 DMR hard to argue against in terms of utility for law enforcement, military personnel or security conscience citizen needing a precision rifle while still offering a modicum of firepower potential due to detachable high capacity magazines stuffed with .308 Winchester.