Kimber has earned a solid reputation for their quality 1911s and more recently with their bolt-action rifles and small concealable pistols. They threw us a curveball six years ago when they unveiled a new handgun: the K6 Revolver.

Kimber has made a practice of delivering well thought-out guns that don’t require a bunch of aftermarket work or parts to function properly. This trend continued with the K6. Revolver authority Grant Cunningham consulted on this project to good effect. He and the Kimber team delivered an imminently practical carry revolver that falls into the same “production custom” category as their 1911s.

A six-shot .357 Magnum that occupies the same space as a J-frame S&W should be a bigger deal than it is, but revolvers are largely overlooked by the gun culture today. J-frames still get a nod for deep cover or back up gun chores because they excel at these tasks.

The K6 sits in a unique place because it hides like a J-frame but performs more like a short-barreled K-frame. Constructed entirely of stainless steel, it weighs nearly twice as much as an alloy framed airweight. Manufacturers have been trying to make guns this size lighter for so long now, the K6’s 23-ounce weight sounds oppressively heavy. In my experience, the weight is prohibitive for ankle carry or pocket carry. It’s not a negative factor in a good holster inside of the waistband. The K6 Revolver is an innovative design, well thought out like this early Classic Custom 1911 that put Kimber back on the map in the 1990s. A two-inch K6 hides like the J frame 442 pictured above it but performs more like the K frame Model 65 .357 Magnum below it. K6 cylinder is slightly wider than this five-shot S&W 640. Otherwise, their size and weight are virtually identical.

The weight becomes a huge positive when firing .357 Magnum ammunition through a gun this size. The saying “Carried often, fired seldom” applies to 12-ounce J-frame .357 revolvers like no other type of gun. Most people carry .38’s in them exclusively after experiencing the brutal recoil these guns produce with magnum rounds.

The K6 was introduced as a two-inch barreled double-action-only (DAO) to compete in the concealed carry market. The lineup has expanded to include three and four-inch versions and models with external hammers and adjustable sights. My focus has been on the originally released model for its suitability as a “carry anywhere” gun.

Obviously, the six-shot cylinder was an engineering breakthrough. It’s 1.39” wide, barely wider than the 1.31” cylinder of a five-shot S&W 640. The little gun has an angular appearance, but sharp edges are radiused and beveled for comfort. The extractor rod provides adequate throw to reliably eject empties.

The cylinder release is ergonomically shaped and its placement makes for intuitive function. Inward pressure released the cylinder, like on a Ruger revolver. The trigger is smooth faced and the double-action pull was engineered to be lighter than competing revolvers. The sights are superior to any revolver in this size range.

The price of the K6 is commensurate with its features. After much consideration, I acquired one a few years back. The TLE version selected came with blackened finish, tritium sights, and G10 “3 finger scallop” grips. These grips are conspicuously good for carry—comfortable and concealable. The side panels are textured and give some traction in the hand, the grip’s perimeter is smooth and doesn’t catch on cover garments. 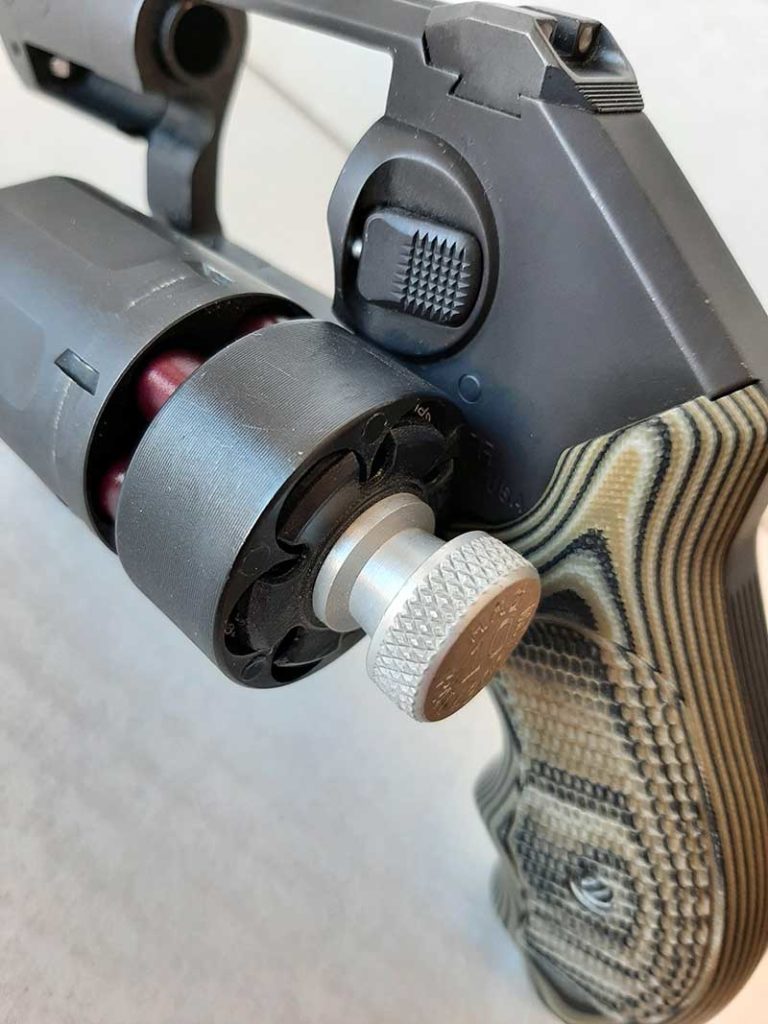 The author’s K6 works great with HKS K frame speedloaders. Applause to Kimber for selecting these excellent G10 grips made by Hogue. They are well relieved with speedloader use in mind. .357 Magnum chambering expands the off-road capabilities of the K6. The 185-grain WFN’s pictured are adequate medicine for most lower 48 trips to the woods.

The grips are sufficiently relieved to allow proper function with the Kimber branded 5 Star speed loader, even with magnum rounds. I bought an HKS speed loader for a Colt Detective Special, having heard that they worked with the K6. It was a no-go with mine. Curiously, some old wobbly K frame HKS (#10) loaders work perfectly with the K6 and these grips (No luck with Safariland Comp 1, 2, or 3’s though).

As good as these sights are, Kimber regulated them for 158-grain .357 Magnum ammunition at 15 yards. Unfortunately, .357 158-grain JHP’s tend to over-penetrate at two-inch velocities and recoil is subjectively heavy. Extended shooting sessions with them will begin to erode one’s fundamentals.

The shape of the frame and open backstrap G10 grips do better at mitigating felt recoil than I would have thought. Recovery time is not subjective, however, and 158’s take time to recover from for follow up shots. Mid-range .357 offerings like Remington’s 125-gr. Golden Saber and Speer’s 135-gr. GDHP-SB strike a good balance of power and control. The .38 +P ammo in this bullet weight is controllable and fast shooting in the K6.

All the 125-135- grain JHP’s in .38 or .357 shot two to four inches low of aimpoint at 15 yards. This seems to be the favored bullet weight for defensive ammunition in these calibers, I hope Kimber will revise K6 sight regulation to reflect this.

Corbon 125 gr. DPX shot well through the K6 and only hit about 2 inches low at 15 yards. The solid copper bullet is longer than a conventional lead core jacketed hollow point of the same weight. Pondering this led me to Barnes VOR-TX 140 gr. XPB ammunition. Billed as a medium game load, it’s basically a heavier version of the XPB bullet that Corbon uses in the DPX. It averaged 1133 fps and hit to the sights at 15 yards. Recoil was not punishing, and recovery time was at the top end of acceptable. This bullet performs exceptionally well at this velocity on ballistic gelatin. I opted to sacrifice a little recovery speed for the performance of this magnum round for a carry load. The author selected the Barnes VOR-TX .357 Magnum 140-grain XPB as a carry load. It is at the top end of controllable and hits to the sights. 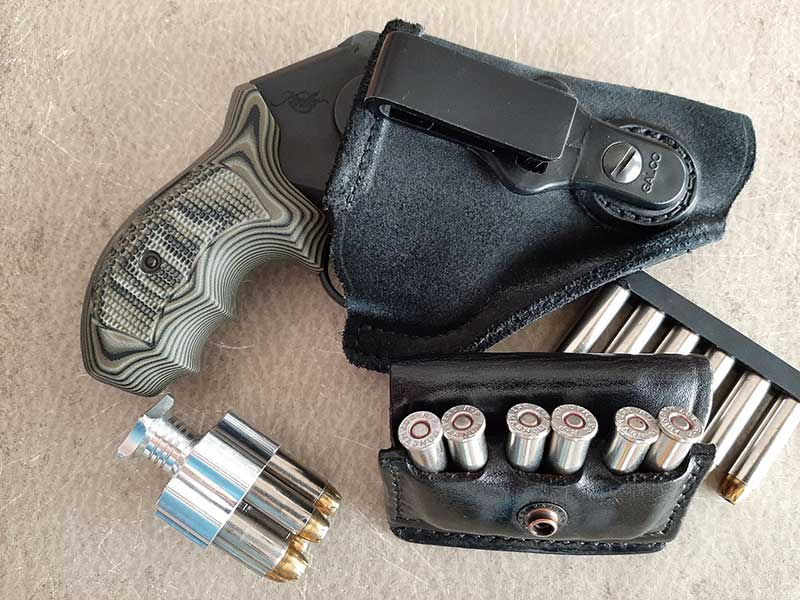 The K6 is just enough gun to be a primary. It is small enough that you can carry it all the time where a bigger gun may get left behind in the name of convenience. The sixth round that the Kimber provides combines with the extra power of the .357 Magnum to cure the author’s angst at carrying a five-shot .38 as a primary gun. These loads are all good options in the K6. The .38 +P can be selected for quick follow up shots. The author chose the Barnes because it hits to the sights at common handgun ranges. The other loads pictured impact lower than point of aim.

The K6 became a near constant companion after I’d shot it enough to trust it. It hides well in light summer clothing carried AIWB and is comfortable to carry all day. The blackened stainless finish has no shine and has resisted corrosion from being sweated on daily for almost two years.

I usually wear a 2×2 pouch and carry a couple of speed strips in pockets for supplemental ammo. A speedloader in a belt pouch can be added in cooler weather when more cover garments can be worn.

The K6 has proven preferable to carrying two handguns on road trips. Even on long journeys, it stays holstered comfortably. A bigger gun starts to hurt and makes it tempting to use the car as a holster.

A full-size handgun in a case is nice for a “truck gun”, but it becomes problematic upon arrival. Do you bring it to the hotel room and try to hide it or lock it in the provided safe when it’s too big to carry? You can use a small gun vault to secure it in your vehicle, but neither option is ideal. Having the gun constantly onboard in your custody is a better choice.

If I end up in the boonies hiking or camping, the K6 is more capable than a small auto because of its chambering. It does not interfere with a backpack when carried up front. I developed a handload that launches a 185-grain WFN-GC cast bullet at just over 1,000 fps from the Kimber. Recoil is sharp, but it provides adequate penetration if needed for black bears.

The action on mine isn’t as good as billed, it has a hitch near the end that makes it hard not to stage. I’d call it decent. Kimber needs to fix the sight regulation. The K6 isn’t flawless, but It’s hard to quantify the level of upgrade it provides from carrying a five-shot air-weight .38.

The K6’s sixth round and other features provide enough peace of mind to carry it as a primary. It’s an acceptable compromise.