A buddy of mine recently asked my opinion about stepping up to the .40 S&W from the 9mm as a “woods round”. I started to suggest that the 10mm would be a superior choice for that duty. I thought about the deer hunt I just got home from. Normally, I carry an N frame .44 Special revolver on hunts. I had downsized to a K frame .357 this season to save a little weight. I handloaded ammunition to be adequate for the mission while keeping pressures to “old K frame friendly” levels.

A few days later, he called and said he had traded for a couple of Smith auto’s and was looking to move one of them. The one for sale was a Performance Center M&P40 M2.0 C.O.R.E Pro Series with a 4.25” barrel. The S&W Performance Center M&P M2.0 C.O.R.E. with Crimson Trace CTS-1550 was the test vehicle for the .40 woods gun. It performed very well. 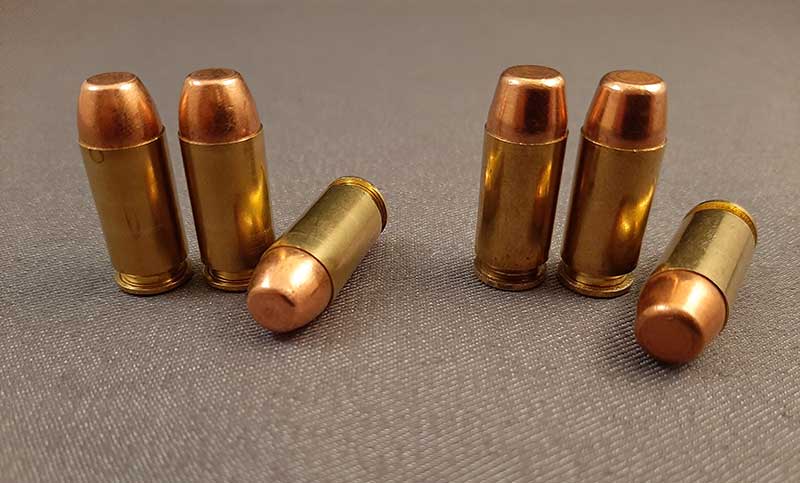 Speer’s 180-grain TMJ on the left is a little faster, but notice the wide meplat of the Remington TMJ on the right. The optic equipped C.O.R.E. made respectable offhand groups at 15 yards with most rounds fired. The Speer packaging shows that the author’s ammo stash is not new. You could do a whole lot worse than the optic equipped .40 loaded with 180-grain Gold Dots or 180-grain TMJ’s in the woods of the southwestern U.S. This Performance Center M&P with a Crimson Trace Optic was a pretty good set up to burn author’s ammo can of old .40 S&W fodder.

Of course, he had it priced very reasonably. It’d been a long time since I owned a handgun chambered in .40 S&W, but I had a small pile of .40 ammo gathering dust in the garage. Upon inventory, it was enough ammo to justify acquiring a pistol to ignite it. I had a Crimson Trace CTS-1550 red dot sight sitting on a shelf. ordered for another pistol it didn’t fit. My buddy was proud to point out that it would fit splendidly on the C.O.R.E. That was the final straw in convincing me that I needed it, the transaction was completed. The gun was like new, and the optic installed with no drama.

I had some old Remington 180-gr. TMJ ammo with an impressively wide meplat. It would make a good woods bullet if deep penetration was needed. It averaged 895 fps with acceptable accuracy. Speer’s 180-grain TMJ bullet profile is not as wide as the old Remington, but it was accurate and ran a little faster, averaging 942 fps. Speer’s 155-gr GDHP clocked a consistent 1,163 fps (extreme spread of 21 and standard deviation of 7) and was very accurate. It would be a solid choice if the concern was more for predators of the two-legged variety. The Model 66 pictured with its 24 round woods payload. It weighs a half pound more than the .40 C.O.R.E.

The M&P C.O.R.E. was very pleasant to fire with all loads put through it. More so than I remembered with other .40’s owned in the past. It’s Performance Center trigger made it very “shootable”. The Crimson Trace optic gave no issues and was a welcome addition for aging eyes. Hits came easy and fast using it. The optic height sights were well regulated for the .40 and were a nice insurance policy against RMR failure. Reliability has been 100%, as you would expect from an M&P.

My load out with the 37-ounce Model 66 while trudging the hills consisted of six in the gun, two speedloaders, and six more on a Tuff Quick Strip for twenty-four total rounds. The M&P with the optic weighs 29 ounces empty. Half a pound is not insignificant when you’re packing it all day. The .40 increases capacity to thirty-one rounds with the fully loaded gun and one spare magazine. Obviously, the semiauto gives the advantage of having to reload less frequently if lots of rounds are needed. Those scenarios may be few, but if you become the target of a pack of wild dogs the capacity would be comforting.

Time spent with this .40 convinced me that it’s a sound choice for a woods gun in the Southwest United States. I wouldn’t want to face a charging African lion with it, but it would certainly settle a mountain lion’s hash. The .40’s ballistics match up well with my .357 Magnum K frame “woods” loads. The C.O.R.E. with the optic impressed me with its mild manners and the ease with which it delivered good hits. After I started writing this, S&W finally introduced a 10mm M&P 2.0 pistol. I may pick one up someday, but I think I’ll follow my buddy’s lead and empty these .40 ammo cans first.