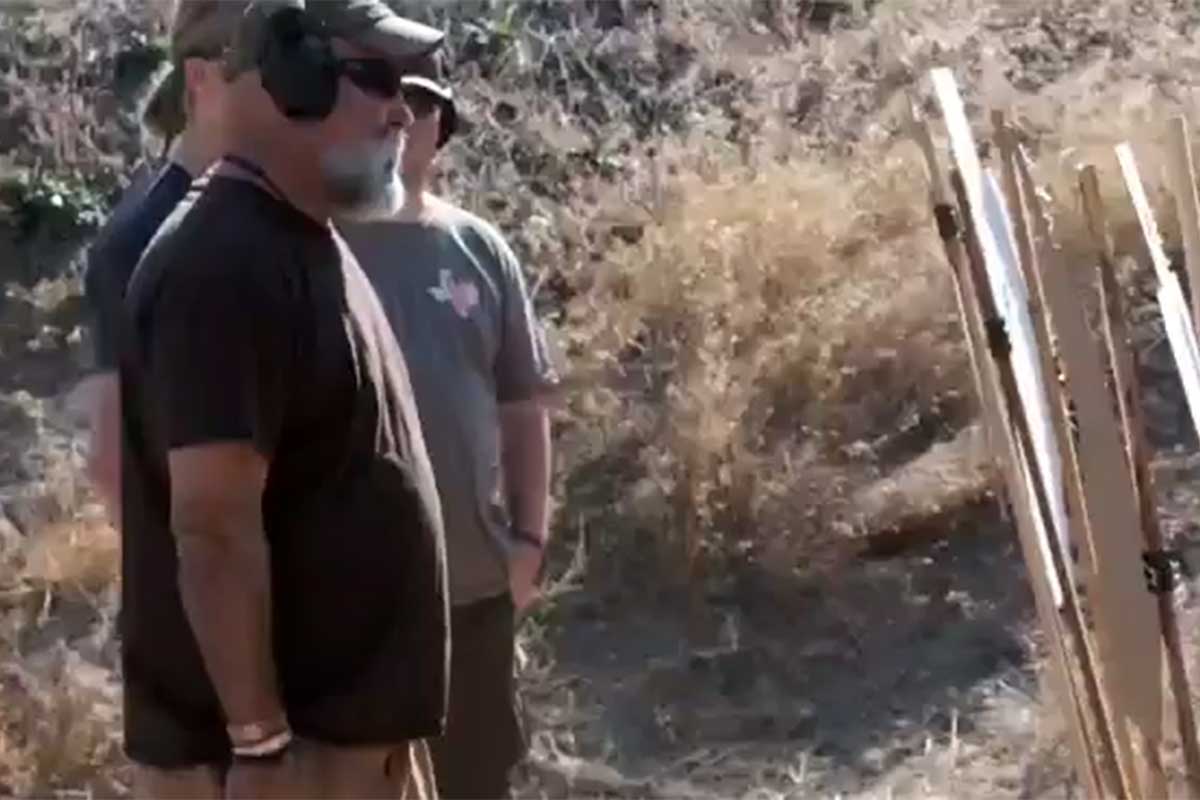 After several decades of managing thousands of people in front of a firearm in high-stress situations, I am a big fan of a hard Low Ready position. Using that traditional Low Ready, no part of the muzzle covers anyone. The position also allows for the operational application of Rule 2 of firearms safety – “Never let the muzzle cover anything you are not willing to kill or destroy.” Nobody is exempt from this.

It is imperative that before we start putting muzzles on people, the situation meets the criteria for using deadly force. The specific event must meet the legal standards for committing an assault with that firearm for it to be justified.

I treat the hard, aggressive draw to the low ready as a priority in threat management when facing potential violent threats. This was very much a daily routine in uniformed police work in a busy city. Casual, hand in the pocket is non-threatening. What’s in the pocket, a revolver and a dump pack of a little cash & old hotel room key cards.

Now that I’m retired and traveling extensively, during times when just being in a large city is very dangerous. I have a process for applying that concept of the same Low Ready that I used so effectively while working as a police officer.

The concept I use daily is to carry a small, lightweight revolver in a discrete holster in my pocket. This has required some of the same adaptations needed for any other type of concealed carry. I wear specific pants and shorts with large pockets while using high-quality pocket holsters. In the last several years, I have had multiple situations where this type of carry was the solution to a potential attack or attempted robbery.

Concealing a small revolver in my pocket allows me to casually have my hand in my pocket in a non-threatening manner initially. I have a full, correctly established grip on my firearm without ever brandishing it or being visibly threatening anyone. On one occasion, I had to draw directly onto a subject (who immediately broke off his attack), and a couple of encounters have involved a partial draw. I was carrying a compact 9mm pistol in my waistband in each of these cases, but the pocket gun was the best solution. These situations de-escalated into the criminals involved finding another victim were complete wins in today’s environment.

One of the best benefits to a Low Ready is that according to the timer, it is the fastest way to get from a ready position to a shot on target AFTER appropriately assessing and evaluating the threat. It also allows us to do an effective visual assessment of the situation without a firearm blocking our vision. The covered low ready works the same. With a full grip established on my handgun, I generally draw to a single headshot at two yards (typical robbery distance) in the range from low .7 seconds to just under a second. This is a fast but replicable street speed. The #25 Safariland and Mika pocket holsters. Both will work quite well in this role. Versions of the Force Option holster developed by the author with The Wilderness Tactical and Simply Rugged Holsters.

As far as specific gear goes, I like a small, lightweight revolver in .32 or .38 caliber (the .22’s and 9 mm’s are also very viable) with a non-snag design and small grips. I find they are easiest to clear the pocket.

Many people use small semi-automatics in this role. While easier to conceal, they also tend to be less reliable when used on real encounters on the street. The other issue to be very aware of, particularly with the striker-fired guns, is that many tend to be very flat in the back and easily snag on the draw; plus, they are unforgiving if a finger gets inside the trigger. I will only carry hammer-fired guns in my pocket, but that is a personal decision. My favorite holsters include Mika, Safariland, A-Holster, and new prototypes I am working on with Wilderness Tactical. In leather, Simply Rugged has been my recent go-to.

I also have some costly ones from premier makers. I avoid poorly designed holsters and those made from cheap materials.

Pocket carry has some negatives that users need to understand. Two of them are the difficulty accessing the pistol while seated and an inability to get to it rapidly.

The biggest positive of using a “Covered Low Ready” is the speed of the draw. However, this requires a level of situational awareness that should be a part of our daily lives. Living on your phone, distracted, and not paying attention to what is going on around you will negate any benefit and turn that pocket gun into a talisman of hope and simply a Lucky Rabbit’s Foot.