Revolvers soldier on as defensive weapons because they perform certain tasks very well. As deep cover carry guns, small revolvers are arguably superior to semiautos. The revolver’s lack of sharp angles lends itself to concealment and minimizes printing.

Small revolvers tend to function more reliably than small autos when used within grappling distance—e specially when fired one handed with a less than perfect grip. It’s hard to beat a five-shot .38 like a J Frame Smith or Ruger LCR for this application. Selecting the right carry ammo to find the balance between effectiveness and user friendliness takes some thought.

Even with the advancements made with modern ammunition, it’s a challenge to make hollow points expand reliably in a short barreled .38 Special. There’s no JHP out there that will consistently perform “as advertised” from a two-inch barrel in the real world. Low velocities, intermediate barriers, and even some clothing fabrics can take the magic out of bullets designed to expand. Plus P offerings bring more pressure, blast and recoil, but cannot guarantee results.

The humble wadcutter is worth a look for this application. It won’t expand, but it will poke a clean .35 caliber hole and leave a large permanent wound channel. The sharp shoulder delivers deep penetration and is less likely to be deflected by bone than a round nose. The flat nose produces more shock and creates more trauma by crushing tissue.

Round nose or non-expanded hollow point bullets pass through tissue leaving permanent channels that are less than bullet diameter; tissue stretches to allow the bullet to pass but then shrinks back. Even at the modest velocities of factory loads (650-700 fps depending on manufacturer), wadcutters exit short barrels penetrate impressively in ballistic gel—around 16 inches. Wadcutters do this with low recoil and blast.

The fixed sights on most .38’s are regulated for standard velocity 158-grain bullets. Wadcutters thankfully hit to the same point of aim.

There are a few companies out there that recognize the value of this concept and load wadcutters for defensive purposes. Buffalo Bore offers a 150-grain hard cast wadcutter loaded to “heavy standard pressure”. They use powders with flash suppressants to minimize flash while firing. Small .38’s like this Ruger LCR make great deep cover guns. Wadcutters might be a better balance in this 13.5-ounce gun than +P JHP’s. 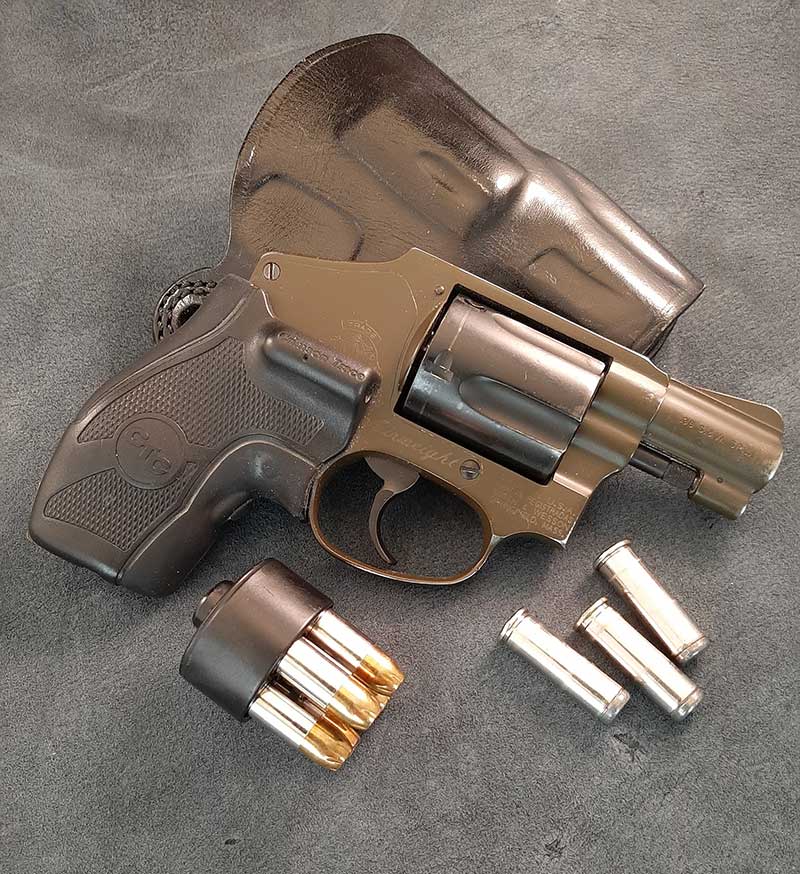 Wadcutters in the gun with round nosed projectiles in the speedloader for an emergency reload. This old J frame Airweight Model 37 loaded with factory wadcutters would make a nice companion for an evening walk in most neighborhoods. This Model 12 was never rated for +P ammo. Wadcutters hit to the sights and would be a good choice in this old light weight. Wadcutters won’t beat up this classic two-inch Nickel Model 12—or the person shooting it. You can bet this old Model 10 will work after being stashed in a drawer for years. The wadcutters would make it easier to deliver good hits than +P JHP’s. Round nose cartridges in the speedloader if a reload is needed.

Buffalo Bore publishes velocities from actual firearms (not vented test barrels) that I have always found to be honest and accurate. BB’s wadcutter averages 868 fps from a two-inch Model 60, 961 fps from a three-inch Ruger SP101, and 1,005 fps from a four-inch S&W.

Underwood Ammunition sells a similar 150-grain hard cast wadcutter in a standard pressure loading. They use a bullet with “Hi-Tek” coating and nickel-plated cases. The polymer coating covers exposed lead with a slick finish, nickel cases stand up to corrosion better than plain brass. The velocity is listed at 1,000 fps. It’s safe to assume that speed will be close to Buffalo Bore’s from a two-inch barrel.

If you train with your five-shot lightweight .38, the benefit of standard pressure ammunition is hard to overstate. The guns may be +P rated, but shooting +P soon pegs your fun meter and moves into “this really sucks” territory for most people.

With wadcutters, you can practice with your carry ammo without getting beat up. This makes most of us much more likely to train with the little guns. Wadcutters are a great option for older guns that were never rated for +P ammo. They enhance the viability of carrying S&W Airweights like the K frame Model 12 and the J frame Model 37.

There are a few negatives with cast wadcutters, both of which can be mitigated. They will foul your gun faster than shooting a diet of solely jacketed bullets. A little more diligence is required during maintenance to keep the revolver functionally clean.

The shape of wadcutters don’t lend themselves to rapid reloads, especially while under stress. It’s a wise practice to carry rounds with a more forgiving profile in speedloaders and/or strips. If you must perform an emergency reload, a bullet with a rounded ogive makes this task much easier.

Another task revolvers perform well is as a home defense handgun that may be used by family members that are less familiar or skilled.

A four-inch Model 10 loaded with wadcutters is a gun that most people can learn to shoot well with minimal training. It can sit it a drawer fully loaded indefinitely with the expectation that it will function reliably if ever called upon.

It’s a good bet that wadcutters will work equally well if that day comes.